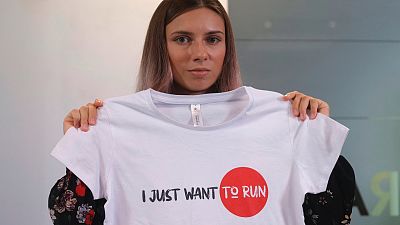 Krystsina Tsimanouskaya arrived in Poland on Wednesday after being granted a humanitarian visa   -   Copyright  Wojtek Radwanski / AFP
By Tom Bateman  with AP  •  Updated: 06/08/2021

A Belarusian athlete who fled to Poland after publicly criticising her coaches at the Tokyo 2020 Olympic Games says Google Translate played a part in her escape.

Krystsina Tsimanouskaya, who arrived in Poland on Wednesday, told a press conference that she used the app to translate a plea for help into Japanese as Belarusian team officials tried to force her to board a plane at Tokyo's Haneda airport.

"When I arrived at the airport I used Google Translate to translate into Japanese that I needed help," Tsimanouskaya said.

"I came to the police and showed the translation".

According to Tsimanouskaya, officials from Belarus' Olympic squad ordered her to pack her bags on August 1 after she posted messages criticising the team's management on social media.

The Belarus Olympic Committee is headed by Viktor Lukashenko, son of the country's President Alexander Lukashenko.

On the way to the airport, the Belarusian sprinter spoke briefly to her grandmother, who explained that there was a massive backlash against her in the media in Belarus, including reports that she was mentally ill.

Her grandmother, she said, advised her not to return. Her parents suggested she could go to Poland.

Upon arrival at Tokyo's Haneda airport, Tsimanouskaya sought help from police, using Google Translate to convey her plea in Japanese.

At first, they didn't understand, and a Belarusian official asked what was going on. She claimed she forgot something at the Olympic village and needed to return.

Japanese police at the airport eventually took her away from the Belarusian officials.

On Thursday, Polish and EU officials welcomed the sprinter, who ran in the qualifying rounds of the women's 100 metre event.

Tsimanouskaya told Thursday's press conference in Warsaw that she had not planned to flee Belarus and did not see herself as a political activist.

“I just wanted to run at the Olympics, it was my dream,” she said. “I still hope that these were not the last Olympics in my life".