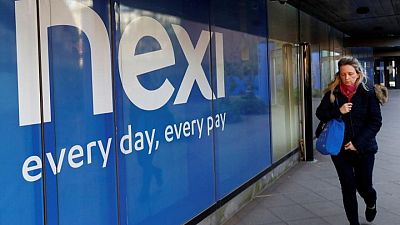 The group said it aimed to grow revenue by around 10% this year, with core profit up 11%-13% and its EBITDA margin improving by 1 percentage point year-on-year, thanks to a “larger and more diversified perimeter” after the merger.

“The volume acceleration across all sectors highlights not only the consumption recovery … but also a shift from cash to digital payments,” Chief Executive Paolo Bertoluzzo said in a statement.

Core earnings or EBITDA rose 27% in the quarter to 158 million euros.

The results were broadly in line with the market consensus, but “somewhat lacklustre compared with expectations,” Jefferies analyst said in a report.

Following the Nets deal, Nexi will merge with Italian rival SIA to create one of Europe’s biggest payment companies.

The closing of the deal with SIA, which was planned by the end of September, is now expected in the fourth quarter after getting regulatory approvals between September and October, Nexi said.

Bertoluzzo told analysts that the group is mainly focused on organic growth and the integration of Nets and Sia, but he will keep considering M&A deals.

“We will be open to consider further M&A opportunities, but we will be very selective… we need to pursue and capture the ones that make sense for the group’s future,” he said.

After the finalization of the Nets acquisition, Nexi removed the guidance it gave in May for 2021, which targeted revenue growing by a “high single-digit” or “double-digit percentage” this year and a broadly stable EBITDA margin.