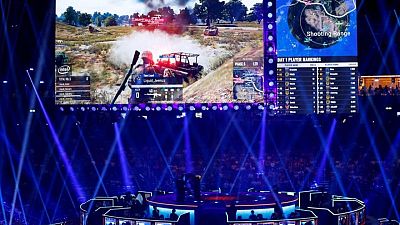 By Joyce Lee and Jihoon Lee

SEOUL -South Korean game developer Krafton Inc said on Thursday it had priced its initial public offering (IPO) at the top of its indicative range to raise 4.3 trillion won ($3.75 billion).

The Tencent-backed company behind blockbuster video game “PlayerUnknown’s Battlegrounds” (PUBG) had cut its IPO target by nearly a quarter in early July after a regulator said it needed to revise its filings.

Despite the target cut, it is the second-largest South Korean IPO ever, after Samsung Life Insurance’s 2010 float worth 4.9 trillion won.

Executives said in a press conference on Monday its PUBG IP has global visibility and a strong fan base, shown by instances such as the recently launched Battlegrounds Mobile India regaining the IP’s previous user number in the country despite months of no service, as an older version was banned.

It plans to expand on the IP through new games to be launched this year and next, as well as through other media forms such as short films and animations, CEO Kim Chang-han said.

Some 70% of the funds raised will be used for global mergers and acquisitions, CFO Bae Dong-keun said, adding that in the past it had been hindered by steep price tags for deals in the global gaming industry, showcased for instance by Microsoft’s acquisition of ZeniMax Media for $7.5 billion announced last year.