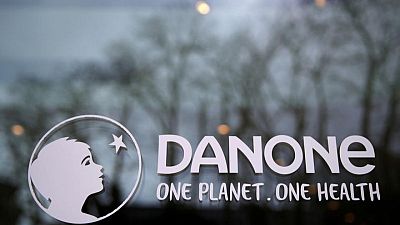 PARIS – Danone will replace nearly all of its board members over two years, including the son of its founder, the French food group said on Thursday, clearing the way for its new CEO.

The company behind Evian water and Activia yoghurt also showed its confidence in the future by announcing plans to buy back 800 million euros ($948 million) worth of its shares in the second half of this year.

The board revamp will see all Danone’s old timers progressively go, including Franck Riboud, a former chairman and CEO and son of Danone’s founder, Antoine Riboud, who will step down as a board member after 30 years in April 2022.

The company also kept its 2021 profit margin guidance, despite input cost inflation, and its goal of returning to profitable growth in the second half of 2021, after posting a 6.6% rise in second quarter sales.

That beat analysts’ expectations for a 5.1% increase as its waters and baby food units returned to growth.

First-half recurring operating income, however, slipped to 1.55 billion euros, a like-for-like decline of 4.2%, as higher costs for raw materials from milk to packaging weighed.

That highlighted some of the challenges facing new CEO Antoine de Saint-Affrique, the former boss of chocolatier Barry Callebaut who joins in September.

“We see this (board overhaul) as further evidence of Chairman Gilles Schnepp’s determination to improve governance and expect the review to be taken positively by shareholders,” Jefferies analysts said.

Former Danone boss Emmanuel Faber was abruptly ousted as chairman and CEO in March following clashes with some board members over strategy and calls from activist funds for him to resign over the group’s lacklustre returns compared with some rivals.

The main challenge for Antoine de Saint-Affrique, who was named in May, will be to boost lagging profit margins and sales.

Danone nevertheless reiterated it expected its full year recurring operating margin to be broadly in line with the 14% achieved last year, banking on productivity gains and price increases to mitigate higher input costs.