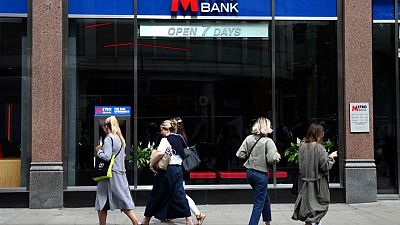 -British lender Metro Bank reported a smaller half-year loss on Wednesday, as it battles to turn around its finances after the pandemic had plunged it deeper into the red.

The challenger bank is betting a push into consumer lending will help put it on a better footing, after a turbulent period staring with a major loan book error in 2019.

Metro nearly halved its pre-tax losses to 139 million pounds ($192.90 million) for the six months to June, compared to a 241 million pounds loss the prior year after a hefty pandemic bad loan provision.

The bank was launched more than a decade ago to challenge Britain’s incumbent high street lenders but has struggled to generate profits from a growing deposit base.

Metro’s total loans at the end of June were 12.3 billion pound’s, 17% lower than a year earlier, after lockdowns hampered spending and following the sale of part of its mortgage book to NatWest last year.

However, Metro’s consumer lending tripled and the bank added it expected lending to pick up in the second half following the full reopening of the economy.

Its net interest margin – a key measure of a bank’s profitability – improved by 13 basis points to 1.28%.

“The path to profitability remains long and uncertain. We continue to believe that the eventual end to the Metro Bank story will be inorganic but, in the meantime, management continues to pivot towards a more sustainable ‘standalone’ economic model,” Investec analyst Ian Gordon said.

“We have seen a pickup in activity in the economy since it started to reopen,” Metro Bank boss Dan Frumkin told reporters.

But Frumkin said the country’s ‘pingdemic’ of people being warned to self-isolate had made it more difficult for the bank to operate.

Recent data showed a sharp slowdown in economic growth this month as hundreds of thousands of Britons had to stay at home when ‘pinged’ by the COVID-19 app.

The bank added 200,000 customers in the first half, partly reflecting its purchase of peer-to-peer lender RateSetter.

Larger rival Barclays reported a quadrupling of first-half profit on Wednesday, while Virgin Money raised its margin forecasts on Tuesday.