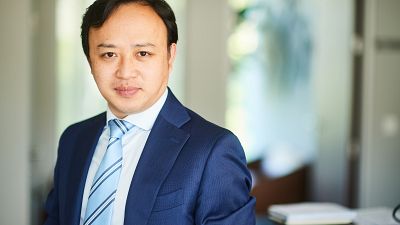 The decision by some EU countries to ban Huawei from supplying 5G infrastructure is based on "political motivation", the Chinese company has said, as it defended its legacy and ongoing investments in the region.

Speaking exclusively to Euronews Next Abraham Liu, Huawei’s chief representative to the EU, said “when you talk about certain, very few countries who have made a different kind of decision based on their political motivation, I think that's politics”.

But he added that the multinational company was nevertheless working to be a part of Europe’s digital future by complying with European regulation and by collaborating with partners in the region.

A legacy in Europe

Huawei has been forced to rethink its global strategy after former US President Donald Trump blacklisted the company over concerns it was using equipment to spy on the American government. Unfortunately for Huawei, a significant number of European governments followed the United States' lead.

Liu, who manages the relationship between Huawei and European institutions, did not directly say why some countries have banned the 5G infrastructure provider, but defended Huawei by emphasising the company’s long-standing footprint in Europe.

“(We have) research centres in over 12 countries, and we also have established quite a broad collaboration relationship with over 150 universities, and this kind of cooperation has been conducted under the rules of law, you know, in European rules of law”, Liu told Euronews Next.

The European Commission has recommended a “common EU approach” and set up a 5G toolbox to protect critical infrastructure against security threats, leaving procurement decisions up to member states. As with many decisions within the bloc, responses have varied, state by state.

Sweden has excluded Huawei’s 5G equipment altogether, a decision Huawei unsuccessfully tried to overturn earlier this year. The company says it is “assessing legal options” in response to the country’s decision. Eastern European countries including Romania, Poland, the Czech Republic, Latvia and Estonia have also taken a hardline approach.

However, larger EU member states have taken what appears to be a more nuanced view. While France has allowed the controversial company to supply 5G equipment, it does so under operating restrictions that include security agency powers to veto infrastructure decisions, if necessary.

Europe’s largest economy Germany has faced pressure from western allies to take a tougher stance on Huawei. In an attempt to balance calls for a hardened approach with the need to maintain trading ties with Beijing, the German government approved an information security law in April this year that tightens governance and infrastructure reporting requirements with the aim of improving information security.

"The use of critical components can be denied if the supplier is not trustworthy," Interior Minister Horst Seehofer told German federal lawmakers in April this year.

Meanwhile in the UK, the government has banned Huawei from the country’s 5G infrastructure plans despite ongoing commitments by the Chinese firm to participate in security and infrastructure audits to help increase confidence.

A report from the UK's Huawei Cyber Security Evaluation Centre (HCSEC) released last week said that while “sustained progress” had been made by Huawei to fix past problems, there was “no overall improvement over the course of 2020 to meet the product software engineering and cyber security quality”.

As more European governments take a tougher stance on China as a result of its the treatment of the Uyghur people and crackdown on pro-democracy activists in Hong Kong, Huawei is positioning itself as an international company and a “European operator” as a way to fight back against negative perceptions.

Huawei said it was able to support Europe's green deal goals because the company’s digital infrastructure is energy efficient.

“When you talk about the 5G base station, ours is more energy efficient. And if you consider there are going to be hundreds of thousands of base stations, that means big things for the future sites to be greener,” Liu said.

Liu emphasised that Huawei was working to meet European expectations, saying the EU had “all the specification or requirements in different aspects, from supply chain to the research, to the human resources to the health care. You know, all these requirements from the EU level has been integrated into the tender documents of the operator and to where we were 15 years ago”.