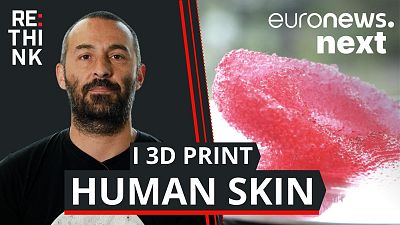 Thousands of people are currently waiting for organ transplants all over Europe.

Imagine a future where, instead of waiting for a match, your local hospital could print a new organ made from your own cells.

This technology called "bioprinting" is the main focus of research for Dr Christophe Marquette, Director of Research at the French National Centre for Scientific Research (CNRS) at University Lyon 1.

"Bioprinting is 3D printing living tissue with cells inside," explained Marquette whose team of scientists are rethinking surgery using this technology. “The goal of this is to make living tissues, grafts or other special tissue for research".

Bioprinting works in the same way as classic 3D printing, using a digital blueprint to create an object layer by layer. But instead of printing plastic, powder or metal, it uses a "bioink," a kind of gel that contains living cells.

Significant work has already been made on simpler tissues like cartilage or skin and researchers around the world are working on the early stages of printing vital organs like lungs, hearts, and livers.

Science still has a long way to go before transplants will happen but Marquette, is in "no doubt" it can be done. He estimates it will take 20 years before lab-grown organs are effectively transplanted into humans.

Marquette's team is currently working on a project known as BLOC-PRINT, in partnership with the French military. Their goal is to regenerate skin on burns victims using bioprinting directly in the operating theatre.

Existing treatment options are very limited. If the patient’s burns cover more than 70 per cent of their body, there is not enough healthy skin for a traditional graft. While artificial lab-grown skins exist, they only recreate the thin outer layers of skin which lack some basic functional elements and can increase scarring.

The method Marquette’s team is developing requires a biopsy of cells from the patient to be put into a bioink. This is then loaded into a robotic arm which deposits the material on the patient’s body during surgery.

"[The patients] themselves are working to help the cells grow," Marquette explained. "So you print and you wait. It's a regeneration. It's not grafting... After two weeks, you should have a complete skin regenerated".

Marquette believes this technology will be fully developed and used in hospitals ten years from now.