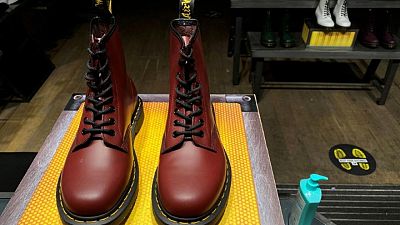 LONDON – Dr. Martens, the classic British boot brand that listed its shares in January, said it had shown its resilience during the coronavirus crisis, delivering annual revenue growth of 15% despite multiple lockdowns which shuttered stores.

However, shares in the group, known for its chunky boots with yellow stitching, slid 9% by 0900 GMT after it did not upgrade financial guidance for the current financial year.

The shares had performed strongly since listing at 370 pence in January. They closed Wednesday at 495 pence, valuing the business at 5 billion pounds ($7 billion).

“We think there’s lots to like about Dr. Martens, apart from the valuation,” said analysts at Peel Hunt.

In its annual financial results, the group also reported exceptional costs of 80.5 million pounds related to the IPO.

“In tough times consumers turn to products that they trust, that they know are going to be credible in their wardrobes for years to come,” he told Reuters.

“So even when many people were stuck at home they still bought a pair of Dr. Martens.”

The boots, popularised by crop-haired skinheads in the 1960s before later being adopted by other youth groups such as punks and goths, are now mainstream fashion.

“Docs is a very democratic brand, where effectively it’s roughly half and half men and women and basically sells across all age groups,” Wilson said.

Dr. Martens reported annual core earnings (EBITDA) up 22% to 224 million pounds, on revenue of 773 million pounds, with e-commerce growth of 73% softening the hit from COVID-19-related store closures. The group has 135 stores globally.

It said trading since the financial year end in March had been in line with its expectations and it maintained a target of “high teens” percentage revenue growth in 2021-22, as the impact of the pandemic reduces.

From 2022-23 and over the medium term the group anticipates “mid-teens” revenue growth.