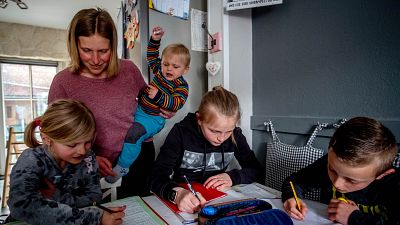 Ruben Smith-Stone spends his typical school day outside with his bikes or tinkering with the launch ramps and jumps the 12 year-old has built for them.

It’s a far cry from the desks and chalkboards of the classroom.

For the past three years, he has been among the now 80,000-strong cohort of kids in the UK eschewing conventional education in favour of homeschooling.

For many parents like Ruben’s, the benefits of an education outside the mainstream system - with its emphasis on testing, streaming and examining - are self-evident.

"These sorts of skills he's doing now will probably help him out in later life, like the carpentry skills, the sports skills, stuff like that,” said Michelle, Ruben’s mother and home-educator.

“I think in his life after education they will help him out dramatically rather than being stuck in a school where he's not learning what he wants to learn and being set into a category that he doesn't fit into, really".

We had parents saying 'I've got my child back, my child is so much happier, my child enjoys learning at home. So I'm now going to home-educate

While it’s a trend that has been growing steadily over the last decade, the closure of schools during the COVID-19 pandemic has precipitated a sharp increase in the number of parents deciding to educate their kids at home.

"What became apparent from the surveys I've done over the last year was a great many parents who were put into a position of their child learning at home, realised how much their child thrived,” explained Wendy Charles-Warner, a trustee of the charity Education Otherwise and a home education researcher based in Wales.

“We had parents saying 'I've got my child back, my child is so much happier, my child enjoys learning at home. So I'm now going to home-educate,'” she added.

“They'd dipped their toe in the water, and found how much it benefited their child".