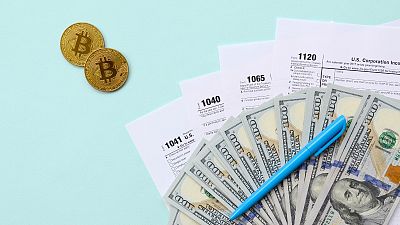 The IRS is looking to bring cryptocurrency assets under the current tax regime.   -   Copyright  Canva
By Tom Bateman  •  Updated: 21/05/2021

Cryptocurrency traders in the United States could face more stringent tax reporting requirements under proposals put forward in a new report from the US Treasury.

The report said cryptocurrencies were a "significant concern," saying they presented a significant obstacle for tax authorities by helping to facilitate illegal tax evasion.

The proposals would also see government investment in America's tax office, the Internal Revenue Service (IRS), funding it by an additional $80 billion (€65.5 billion) over the next decade.

The moves are part of a plan to close the "tax gap" – the difference between taxes owed and taxes paid – which could rise to around $7 trillion (€5.7 trillion) over the course of the decade, the report said.

While roughly 99 per cent of taxes due on wages are paid to the Internal Revenue Service (IRS), compliance on less visible sources of income is estimated to be just 45 per cent.

Also falling into the tax authorities' crosshairs are wealthier Americans who tend to make more of their money from assets.

"While roughly 99 per cent of taxes due on wages are paid to the Internal Revenue Service (IRS), compliance on less visible sources of income is estimated to be just 45 per cent," the report said.

Among the proposed changes, businesses that receive "cryptoassets" worth more than $10,000 (€8,176) would have to report them to the IRS, bringing cryptocurrency into line with current rules on cash receipts.

Another policy change would require payment services providers to file Form 1099 reports in order to discourage their clients from attempting to hide their income by using alternatives to traditional banks.

"Although cryptocurrency is a small share of current business transactions, such comprehensive reporting is necessary to minimise the incentives and opportunity to shift income out of the new information reporting regime," the report said.

One major stumbling block for US tax authorities is the outdated technology in use by the IRS, which has held back the agency's ability to tax income held in assets like crypto.

According to the report, the IRS's main tax processing system, responsible for processing over 150 million annual tax returns that account for $1.2 trillion (€981 billion) in revenue, is written in programming languages that date back over half a century.

The combination of outdated tech and the growth of alternative finance has disproportionately benefited America's top earners, "who can avoid taxes through sophisticated strategies such as offshoring, creating complex partnership structures, or moving taxable assets into the crypto economy," the report said.

Also on Wednesday, US Securities and Exchange Commission (SEC) Chair Gary Gensler indicated he would also like to see cryptocurrency trading come under tougher regulation.

"This is a quite volatile, one might say highly volatile, asset class, and the investing public would benefit from more investor protection on the crypto exchanges," Gensler said in remarks at the Financial Industry Regulatory Authority (FINRA)’s annual conference.

"Technology is always evolving, as are our markets. As we continue to stay abreast of those developments, the SEC and FINRA should be ready to bring cases involving issues such as crypto, cyber, and fintech," he said.

"When you have difficulties to find out what are the real fundamentals of an investment, then what you’re doing is not a real investment," de Guindos said.