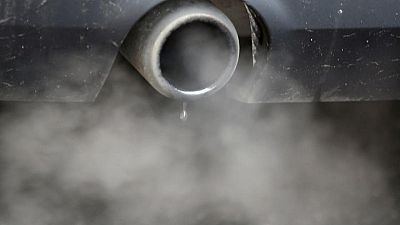 LONDON (Reuters) -Britain’s Emissions Trading System (ETS) kicked off on Wednesday as the UK strives to eliminate net emissions by 2050, with carbon prices reaching over 50 pounds ($70.77) per tonne and making the cost of polluting in Britain higher than in the EU.

The ETS is a method of charging power plants and other industrial entities for each tonne of carbon dioxide they emit. Britain launched its own market to replace the European Union’s ETS after it left the bloc.

“The first trades signal confidence in the UK ETS as a system. We expect a nervous and volatile start but expect EUAs to serve as a reference point for UKAs going forward,” said Refinitiv analyst Hege Fjellheim.

Until Wednesday UK companies, unable to buy UK permits, had been buying EU allowances as the only available hedge for carbon prices.

EU carbon prices have fallen around 10% this week which traders said was partly due to the launch of the UK scheme.

“The sole link between the UK ETS and EU ETS is the fact that UK players have kept buying EUA as the best carbon proxy hedge,” a carbon trader said.

The first auction of government permits on Wednesday via ICE, saw more than 6 million UK allowances sell at 43.99 pounds per tonne.

“Our UK ETS is more ambitious than the EU system it replaces and with today just the start of regular auctions, we are one step closer in our ambition to have the world’s first net zero carbon cap and trade market,” said UK energy minister Anne-Marie Trevelyan.

The government said this was the first of many auctions in the UK ETS and the market needs time to find its feet and settle.

“What we are seeing now is the initial prices on the primary and secondary markets,” it added in a statement.

Companies which need to participate in both the EU and UK carbon markets hope a link will be established between the two to allow cross trading of permits but there are no signs yet of formal negotiations on linking.