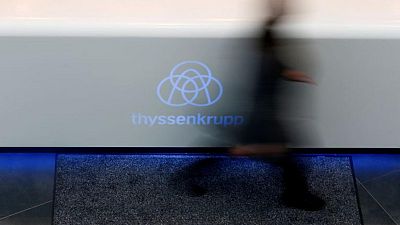 FRANKFURT (Reuters) – Thyssenkrupp’s closely-watched cash flow plunged deeper into the red in the second quarter, hit by restructuring costs and investments that overshadowed a guidance upgrade on the back of stronger demand and prices.

Shares in the German conglomerate fell as much as 6.2% after the group said negative free cash flow before mergers and acquisitions widened to 750 million euros ($911 million), more than twice the 367 million in the same period last year.

“This is putting pressure on the stock,” said a trader, also pointing to profit-taking as inflation jitters triggered a global sell-off in equities.

Returning to positive cash flow has been one of the main goals of the submarines-to-bearings group in its efforts to win back confidence among investors and to prove it has a sustainable business model.

Thyssenkrupp also toned down expectations ahead of a supervisory board meeting scheduled for May 19, with finance chief Klaus Keysberg saying no major decisions were planned.

Keysberg had told analysts in February that the group would come up with concrete proposals for how to develop its hydrogen division, which has drawn huge interest from investors, in May.

“We also know that we still have a lot of work to do,” CEO Martina Merz said.

Thyssenkrupp is emerging from years of crisis during which it lost two CEOs, warned on profits numerous times and sold its elevators division – its crown jewel – to private equity.

Boosted by a global economic recovery that is driving both demand and prices for steel, car parts and materials, it also raised its full-year outlook for the second time in three months.

Thyssenkrupp now expects adjusted earnings before interest and tax of hundreds of millions of euros in the year to September, having previously forecast to almost break even.

(This story refiles to fix typo in headline)