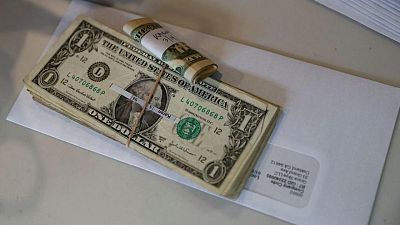 WASHINGTON (Reuters) -The U.S. Department of Justice is investigating whether financial technology companies including Atlanta-based Kabbage Inc may have erred while distributing billions of dollars in pandemic aid to struggling small businesses, three people with knowledge of the matter told Reuters.

The investigation, led by the Justice Department’s civil division, is examining whether Kabbage and other fintech companies miscalculated how much aid borrowers were entitled to from the Paycheck Protection Program (PPP) due to confusion over how to account for payroll taxes, the three people said.

A fourth person with direct knowledge of the matter said a number of fintechs were being probed over the PPP tax issues but declined to provide names.

A probe does not necessarily indicate wrongdoing and it was unclear if the investigation will result in penalties against the companies, two of the three sources said.

A spokesperson for the Justice Department declined to comment.

Kabbage Inc., which manages Kabbage’s PPP loans and also goes by the brand K Servicing, did not respond to multiple calls and emails seeking comment. Spokespeople for American Express Co., which in August bought most of Kabbage’s assets other than its loan portfolio, declined to comment.

The previously unreported probe underscores how the unprecedented $780 billion program, which was launched by the Small Business Administration (SBA) on April 3, 2020, to mitigate the fallout from COVID-19 shutdowns, has created legal and reputational risks for some lenders.

Reuters reported https://www.reuters.com/article/us-health-coronavirus-usa-ppp-exclusive/exclusive-u-s-watchdogs-train-sights-on-lender-misconduct-in-pandemic-aid-program-idUSKBN2841MT in November that a handful of federal agencies were scrutinizing lenders over a range of PPP issues, including failing to properly vet borrowers’ payroll expense calculations and potentially discriminatory lending policies.

Under the PPP, big banks, community lenders and fintechs have dispensed millions of government-backed loans to small businesses hurt by the pandemic lockdowns. If borrowers spend the money on payroll and other business expenses, the government repays the lender on behalf of the borrower.

While the program has been hailed as a lifeline for small businesses, its launch was rushed and many of its rules were initially unclear. One challenge lenders faced in April 2020 was how to account for federal, state and local taxes when calculating a company’s overall payroll costs, which determined their maximum allowable loan.

Fintechs have attracted government scrutiny because they processed loans at high speed using software that in some cases had glitches, causing errors in applications, one of the sources said. Other industry sources also said that fintechs’ use of automated lending platforms with few manual checks caused errors to be replicated across thousands of loans.

Lenders have said they were under enormous pressure to lend vast sums of money to millions of businesses quickly, while having to keep up with ever-changing PPP rules.