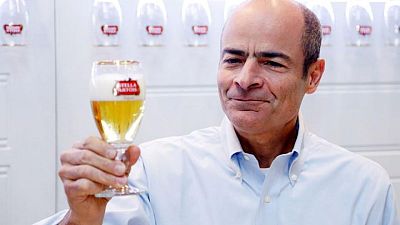 BRUSSELS (Reuters) – Carlos Brito, who built Anheuser-Busch InBev into the world’s biggest brewer during 15 years at the helm, will step down as CEO in July to be replaced by the group’s North America boss as it shifts focus from acquisitions to boosting sales.

The brewer of Budweiser, Corona and Stella Artois lagers said on Thursday its board had unanimously elected Michel Doukeris, the former head of sales, to succeed fellow Brazilian Brito, from July 1.

Chairman Martin Barrington said Doukeris’ expertise in brands, consumers and innovation meant the 48-year-old was ideally suited for the company’s next phase.

That phase could be more focused on boosting sales of over 500 brands than on acquisitions in an already concentrated brewing market.

“This should not come as a shock to investors…. Michel was the clear lead internal candidate,” said Trevor Stirling, beverage analyst at Bernstein Securities, adding Doukeris had an impressive track record, notably in China and Asia-Pacific.

Brito, 61 today, arrived when the brewer was called InBev, the result of a 2004 merger between Belgium’s Interbrew and Brazil’s AmBev, which he headed.

During his tenure, the company took over Anheuser-Busch in 2008, added Mexico’s Grupo Modelo and in 2016 spent over $100 billion on SABMiller, then the world’s second largest brewer.

The acquisition brought more Latin American markets and saw it enter Africa for the first time.

Its share are now less than half their late 2015 peak, with craft beer eating into its U.S. sales and difficulties in Brazil and South Africa.

“Brito was the architect who led and built AB InBev into the world’s leading beer company and a leading global consumer packaged goods company by masterfully integrating the many businesses that comprise AB InBev today,” Barrington said.

The company separately reported first-quarter earnings ahead of expectations, even with lockdowns closing hospitality in much of Europe and a one-month alcohol sales ban in South Africa.

Sales of beer surged 64% in Asia-Pacific, a year on from the initial coronavirus lockdown in China, a major AB InBev market.

They rose by more than 10% in Latin America, outperforming industry growth in two of its top markets, Brazil and Mexico. In Europe, sales of its own beers were flat.

Earnings before interest, tax, depreciation and amortisation (EBITDA) rose 14.2% on a like-for-like basis and removing the impact of currency translation to $4.27 billion, beating the 6.6% average forecast in a company-compiled poll.

This figure should increase by between 8% and 12% in 2021, with revenue growth greater than that, based on higher beer sales, price hikes and a shift in consumer taste to premium brands, AB InBev said.