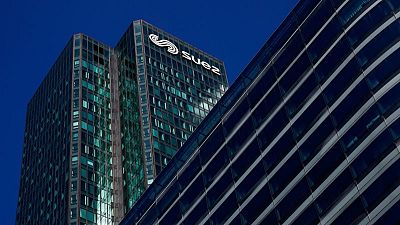 PARIS (Reuters) -French waste and water management firm Suez reported on Thursday rising sales and core profits for the first quarter, boosted by recycling activities, as it readies for a $15 billion takeover by bigger peer Veolia.

The two companies struck a preliminary merger deal in mid-April after months of wrangling, and the deal also entails spinning off some Suez assets including much of its French water business into a separate new entity held by funds.

Suez said revenues came in at 4.3 billion euros ($5.2 billion), up 5.9% year on year when stripping out acquisitions and disposals and foreign exchange swings, and sales were also up on the same period in 2019, before the coronavirus pandemic.

Earnings before interest, taxes, debt and amortisation (Ebitda) rose 17% like for like to 768 million euros, and was also above 2019 levels.

The group said it aimed to reach a definitive agreement with Veolia by May 14.

Suez, which counts Veolia as its top investor with a 29.9% stake, will hold its annual shareholder meeting on June 22.

One task for Suez and Veolia is to finalise the spin-off of some Suez assets into a separate, new entity that will remain independent and compete with Veolia in areas like water management in France, partly for antitrust reasons.

Infrastructure fund Meridiam is set to be a major shareholder for the “new Suez”. Other potential investors such as Ardian and Global Infrastructure Partners have backed away.

He said agreements with investors in the “new Suez” would be partly struck on the basis of valuation but also their commitment to develop the firm in France and overseas.