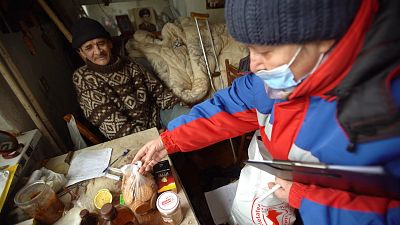 The EU is offering €3 billion in emergency loans to ten of its neighbouring countries as part of its global response to the coronavirus pandemic.

Known as macro-financial assistance (MFA), the loans come with highly favourable terms and low-interest rates. The aim of the MFA is to help countries that are geographically, economically and politically close to the EU limit the economic fallout from the crisis.

Why is the EU lending money to its neighbours?

Varhelyi tells euronews that it is in Europe's interests to ensure the interests of its neighbours. "Creating a world that is more like Europe outside Europe" means Europe will have "foreseeable business climate investment possibilities" for companies and more "exchanges with these countries", he explains. All of these things, he says, will contribute to the general stability and security of the region.

Moldova - one of the countries to benefit

In Moldova, the average monthly income is €350 per month and a quarter of the workforce has already emigrated to work in other countries. Since 2010, the EU has granted Chisinau macro-financial assistance on two previous occasions.

Moldova has been granted €100 million in MFA aid to help deal with the pandemic. It received a first installment of €50 million in November 2020. This much-needed financial boost will especially help Moldova's agricultural-based economy.

Farmers there have not only suffered from the crisis, but also from a drought that started in 2020. According to BalkanInsight, from January to September 2020, agriculture in the country decreased by 25.3%, a loss of about €1 billion.

Charities are stepping up to help some rural areas in Moldova, but it’s not an easy task.

Daniela Sevciuc, a National Coordinator for the Moldova Red Cross says that "the list of people in absolute poverty got bigger, so, as the list became bigger, it was harder also for the state to sustain them all".

Despite being one of the poorest countries in Europe, Moldova had seen a growth rate of 3.6% and unemployment was stable at 5,1% before the pandemic. This government was about to launch a public infrastructure construction programme but this has now been put on hold.

Maia Sandu, the country's newly elected president, tells us that "the economy badly needs this assistance. Moldovan businesses have not been supported at all last year. There is not money in the current budget to support the economy". She explains this will lead to jobs being lost, incomes disappearing and increased poverty.

To receive the money, countries must have signed up to a financing programme with the International Monetary Fund (IMF), meet conditions for respecting human rights, implement democratic, economic and governance reforms and crackdown on corruption.

Moldova must meet these conditions in order to benefit from a second MFA instalment of €50 million.

For the Moldovan president, the conditions are welcome. She tell euronews that they "go along the people's demands for good governance" and that "EU taxpayers want to know that the money they've been providing to the Moldovans reaches the Moldovans and helps the Moldovans and does not end up being misused by some of the corrupt people, including in the parliament or in other state institutions".

Dumitru Pîntea, an economist at Expert Grup, one of the organisations in charge of monitoring the MFA conditions, says he is pessimistic that the MFA conditions will be met in time. "Moldova doesn't have a plenipotentiary government at the moment which can implement the reforms, and at the same time, the government does not have the support in the parliament. The majority of the deputies are against the reforms and against these conditionalities", he says.

Eu Comssioner Várhelyi says he remains confident that Moldova will be able to implement the conditions of economic reform to get its second financial installment. He has met President Sandu and believes in her commitment.

He tells us that "it's not in the interests of the EU to pursue these objectives, these objectives we have set together, with Moldova, and it is in the interest of the Moldovan people to achieve all these reforms because that will make their judicial system, their economic system, much more resilient and much more capable of recovering from the Covid crisis".