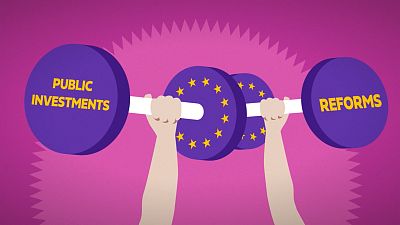 A plan for Europe

At the heart of the EU's recovery plan to get Europe back on its feet after the coronavirus pandemic, is the Recovery and Resilience Facility (RRF.)

The RRF is the biggest building block of the €750 billion pandemic recovery package, known as Next Generation EU.

A political deal was reached between the European Parliament and the Council of the EU in December 2020 and the legislation was formally approved by Parliament in February 2021.

The agreement, unprecedented amongst EU leaders, allows them to collectively borrow money to fuel spending restart the economy in the aftermath of the pandemic.

The €672.5 billion RRF comprises €312,5 billion in grants, and €360 billion in loans. It will be spent on public investments and reforms to strengthen EU countries' economies.

To be eligible for financing, member states need to prepare national recovery plans showing they are focussing on key EU policy areas.

These include allocating at least 37% to the transition to a greener economy, and 20% to initiatives to digitise their economies, as well as economic cohesion and competitiveness, and social and territorial cohesion.

Member states should submit their national recovery plans to the European Commission by late spring. The first payouts are expected to be made in the summer.

The fund is set up to run for six years between 2021 until 2026. However before the European Commission can go to the financial markets to borrow this money, it must be formally approved by the Council. Member states national parliaments then have to ratify a piece of legislation called the European Council’s Own Resources Decisions (ORD) which is the legal basis for authorising funds to be borrowed, paving the way to the bloc becoming carbon neutral by 2050.