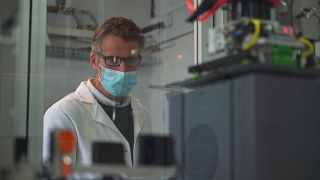 At the heart of Europe's recovery plan is the €672.5 billion Recovery and Resilience Facility to help get the economy back on track, made up of €312.5 billion in grants and €360 billion in loans.

The European Parliament has now voted to approve the RRF, confirming the political agreement reached in December 2020. The vote on 10 February paves the way for the RRF to come into force in the second half of February 2021.

To access the money, member states need to prepare national recovery plans showing they will allocate at least 37% of the funds to the transition to a greener economy and at least 20% to initiatives to digitise their economies. The money must be spent on public investments and reforms to strengthen the country's economy.

Euronews reporter Guiilaume Desjardins went to visit a project to build a green hydrogen biorefinery in Provence in France, hoping to benefit from EU funds.

France has drawn up a €100 billion national recovery plan, with €40 billion expected to come from the EU’s recovery and resilience facility. About a third of this (€30 billion) will be spent on the transition to a greener economy. This would include investments in building renovations, clean transport and decarbonizing industry.

The green hydrogen sector will receive €7 billion: €2 billion from the recovery plan over the next two years, then an additional €5 billion by 2030.

French energy giants Total and Engie have teamed up to launch the Masshylia project in Châteauneuf-les-Martigues in Provence. It would be France's largest green hydrogen production site, used to make biofuel, a cleaner alternative to diesel.

The project is counting on public funds to kickstart the green hydrogen sector.

According to Jean-Michel Diaz, the Mediterranean regional representative at Total, these funds are essential because "the cost to produce the first units are much higher than they would be if you used an existing industrial facility already running at full scale. So in order to get a final product available, at an acceptable cost to consumers, you need to help at the start".

The Masshylia project would also help the region's economic recovery.

Between 50,000 and 150,000 direct and indirect jobs would be created, according to Sylvain Brémond, Deputy Director General at Capenergies. He also believes that the financial investment will help the region combat climate change.

Nearby company Helion, a hydrogen battery maker, says that as a related industry it will benefit from the creation of the green hydrogen plant.

"Industrial production goes hand in hand with investment in production tools, testing tools and infrastructure", says Helion's Chief Operation Officer, Benoît Vesy. He adds that his company currently has 40 workers but he predicts they will grow to over 100 by the end of the decade.

Projects like the green hydrogen plant in France, are the kind of projects the Commission wants to see governments invest in says European Commission Vice President Valdis Dombrovskis.

"A substantial part of the recovery and resilience facility is to be linked with our work towards climate neutrality. Clean hydrogen is clearly one of those work directions" says Dombrovskis.

The Commission Vice-President adds however that "it's for each member state to decide which projects they are exactly putting forward. So in this case, it's for France to decide whether to present this project in their recovery and resilience plans."

EU countries are in the process of submitting their nation recovery plans to the European Commission.

Dombrovskis says there are other initiatives for a green transition that governments can consider investing in: "other activities that can be financed in renewable energies, are in what we are calling a renovation wave, so improving the energy efficiency of buildings and many other areas".

EU leaders struck a deal on the Pandemic recovery fund in December 2020 after long negotiations.

"Well, obviously, those had been complicated negotiations" says Dombrovskis, " but we have created an unprecedented financial package from the EU point of view. It's a very substantial amount of money. So now the main thing is that this money really goes to the economy and it's well spent".

The first payouts could take place as soon as summer 2020.

"That's what we are aiming for" says Dombrovskis. He adds that it is "important that member states are preparing their recovery and resilience plans so that the European Commission can approve them. And that would be then the basis for paying this money. "

"We would start with paying after approval of the plan of 13% of pre-financing. So that would be a substantial amount of money immediately flowing towards the member states."

The Commission's Vice-President warned however that there was still one more stage, before the payments could be made. "There is another important element: for the European Commission to go to the markets and to borrow this money, we need all member states to ratify. So it's another important part which member states need to do to ensure that this money is really flowing".

As Europe continues to reel from this pandemic, the pressure is on to get the recovery funds where they're most needed, as soon as possible.