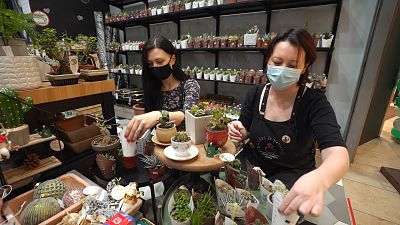 As the second wave of the pandemic continues, jobs and businesses across Europe are being hit hard. However many have been cushioned from the worst of the economic fallout by government job retention schemes to keep people in work.

Although unemployment is set to rise to 9.4% in 2021 in the eurozone area, an increase of 1.9% from the 2019 pre-pandemic level of 7.5% , it has stayed relatively low when compared to the drop in economic activity.

We'll take a look at some of the short-time work and furlough solutions in use across the continent that are being supported by a European Commission scheme known as SURE (Support to mitigate Unemployment Risks in an Emergency).

European governments have been subsidising wages and keeping workers on the payroll during the coronavirus pandemic through short-time work and furlough schemes.

SURE acts as a second line of defence for these schemes, in particular for the self-employed, by providing emergency financial assistance of 90.3 billion euros in loans to 18 EU countries

The European Commission is borrowing up to 100 billion euros on capital markets by issuing bonds with low-interest rates that benefit from the EU’s solid credit rating. It then lends the proceeds to Member States under the same conditions the money was received. All bonds issued in 2020 are due for repayment anywhere between 2025 and 2051.

The SURE bonds are ‘social bonds’, meaning the funds serve a truly social objective.

Already almost 40 billion euros has been raised on the markets by the social bonds since October last year.

Euronews reporter, Fanny Gauret, went to Lithuania to find out how the self-employed and small businesses are being helped.

Who gets the help?

Kristina and Dovile are sisters who opened a plant shop in Vilnius in September 2019. Just a few months later, the first lockdown happened and they had to temporarily close their shop.

Despite making only half of what they hoped last year, the sisters have managed to open another shop, and hire three more people.

The spread of the virus means they have now had to close their shops again. They have now gone online and are continuing to sell their plants. The one inconvenience of the scheme, they say, is "quite a lot of paperwork".

As public expenses increase to protect workers from losing their jobs and to support businesses like Kristina and Dovile's, Lithuania is being supported by the EU SURE initiative in the form of a low-interest loan of around 600 million euros.

Thanks to this help, Lithuania is planning to spend almost 900 million euros in 2021 to finance benefits and wage subsidies. They will be organised and distributed by the Public Employment Services.

Inga Balnanosiene is the Director of Public Employment Services. She says "the solidarity of all EU members is very important". She thinks that Lithuania's state budget would only have been able to support "20% of all who need financial support now".

Freelance photographer Martynas, benefitted from this support when the first wave of the pandemic took away 80% of his income. Unlike employees, the self-employed get around 250 euros a month, less than half the minimum wage.

Martynas says that the money has helped him pay taxes and some bills, but it is not enough. He has a wife who is employed and has been able to help with the family's finances. He is putting his hopes on the vaccines and a quick return to his usual income.

To tell us more about the SURE scheme we spoke with EU Economy Commissioner, Paolo Gentiloni. He was closely involved in designing and putting in place SURE. He told us that "the social consequences would have been enormous without these schemes to support jobs in all European countries".

He believes that schemes like SURE allow member states to react positively to the risks of the pandemic on unemployment and have stopped unemployment in the EU from surging to dangerous levels.

Self-employed workers in Lithuania don't receive as much money as employees. They are in a rather precarious situation. The commissioner says that they are encouraging member states to protect these workers, but they are not intervening in individual government schemes. It's not the purpose of the SURE project.

The European employment outlook for 2021

Gentiloni, says that the pandemic hasn't gone anywhere and that economic recovery will depend on "how effective the vaccination campaign will be". At least the first quarter of 2021 is going to be hard because "we are still struggling".

There are tough times ahead for the economy in the first quarter of 2021, but SURE is helping to mitigate them.

An overview of how Europe's recovery initiatives work