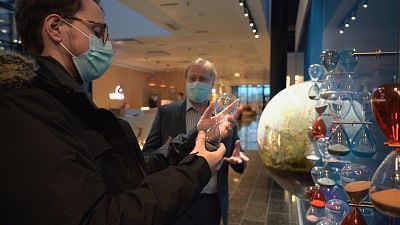 This episode of Real Economy looks at the economic and social impact the pandemic is having on the European Union. We will delve into the human face of this impact and talk to those directly affected. Plus we take a glance at the EU’s recovery package ‘Next Generation EU’ and weigh up its importance for EU citizens.

In cities across Europe, the festive period is starting to take hold. But with Christmas markets cancelled and confinement measures hitting tourism and the service sector, festive cheer is in shorter supply than usual.

The Finnish capital, Helsinki, is also known as ‘The Christmas city’. Its festive iconic market is usually a highlight, but not this year, it’s closed. When the second wave of the pandemic hit, the country had to renounce a good share of its winter tourists.

The Christmas market usually contains around 100 small huts run by entrepreneurs. Stuba Nikula is the Managing Director of Events Helsinki. He told Euronews’ Guillaume Desjardins that the vendors could lose up to one-third of their annual turnover, calling it “a personal tragedy.”

In order for the entrepreneurs and artisans to still be able to sell their Christmas products, a Christmas e-market has been created. Until the 22nd of December, the market has gone online and shoppers are being encouraged to post the items bought on social media under #helsinkichristmasmarket.

The real face of the economic struggle

This summer saw a 95% drop in the number of tourists visiting Paris. It has left hotels, tourist attractions and the service sector barely able to survive.

The famous bouquinistes, or second-hand booksellers, along the quays often find themselves making only a few euros a day.

2020 What happened to Europe's economy?

2020 has been a year of contrasts. The first half saw the deepest recession in EU history. Then between July and September, things looked up with a record growth of 12.1%. But that recovery came to a sharp end with the second wave of lockdowns.

Not all EU economies have been affected equally. But even those who have taken less of a hit are still vulnerable. For example, Finland’s economy contracted -4,4% in the second quarter whereas Spain’s contracted -17.8% but stalling demand from international partners and other EU members is affecting Finnish companies.

The second wave of lockdowns devastated businesses across Europe and led the European Commission to downgrade its economic growth forecast for 2021 for the Eurozone from 6.1% down to 4.2%. It’s expected to be two years until the European economy comes close to its pre-pandemic level.

‘Next Generation EU’ recovery fund - how much does Europe need it?

The EU has agreed on a landmark 750 billion euro recovery package known as ‘Next Generation EU’. It will include 360 billion euros in loans and 312.5 billion euros in grants. The money will be borrowed on the financial markets using the EU’s strong credit rating.

According to Odendahl, we really need this fund. Southern Europe’s economies depend a lot on tourism and he believes the European recovery fund can bridge the gaps between the north and the south’s finances:

“The amounts that are going from the north of Europe to the south are quite sizeable”, says Odendahl, adding “for a country like Greece, for example, it is bound to receive roughly 2 percent of GDP over the next couple of years. That’s a very sizeable transfer.”

He told euronews that there are a tough couple of months ahead because we’re currently between the prospect of a vaccine and its distribution. He expects there will be a “post-corona catch up boom, but until then we will still struggle with the virus and the lockdown measures that have been put in place”.

Euronews’ Guillaume Desjardins headed to Helsinki to see how manufacturing businesses there are faring.

The Finnish capital has the busiest passenger port in the world with over 12 million people crossing the Gulf of Finland every year. Despite that, the country has been able to keep the contagion rate somewhat at bay. This partly explains why the economic contraction is one of the mildest in the EU. The Finnish government has also unlocked a 15 billion euro package to support workers and businesses.

But with their EU trade partners still hit by the crisis, will it be enough?

Beweship is one of the largest privately-owned freight companies in Finland. It has seen trade coming in and out of Finland drop this spring. Bengt Westerholm, the CEO of Beweship, described the reality for the company for us:

“When you have 95% of the aircrafts on the ground, basically, then air freight stops."

“On the sea freight, all of a sudden, we have a situation where you have a large portion of all the world's containers and container ships, are stuck outside of the Chinese coast, waiting for the thing to clear.”

Finnish engineering company, Wärtsilä, employs nearly 19,000 workers globally. It makes energy-efficient equipment for ships and power plants. It lost 10% in sales this year. But despite the EU’s lowered growth forecast, they see signs of hope in the upcoming EU relief package and the environmental focus of the Green Deal.

However, until the green deal gets going and tourism gets back on track, Wärtsilä may still struggle. One of the company’s lines of business is providing engines for cruise ships. As COVID-19 restrictions have left many of these unable to sail, it is having an impact. Not only are their usual customers delaying investments because of economic uncertainty, but they are also losing revenue in after-sale maintenance due to the underuse of machinery.

In Finland, nearly half the companies in the tech sector expect the situation to worsen in the coming months. Worse still, one out of every five service sector businesses are expected to become bankrupt.

Christian Odendahl, the chief Economist of think tank The Centre for European Reform confirms that this is a worrying prospect for Finland. He says many businesses will struggle even once the economy picks up again.

“This pandemic has forced people to try new things, particularly in the digital and remote working spheres, so I think there are some businesses that will struggle, even if the economy fully recovers because people have changed their habits, they’ve changed their behaviour, in some parts for good.”

Finland is proof that keeping the pandemic in check is not enough to safeguard the economy. The situation in neighbouring countries also has an impact. When it comes to EU trade, nobody wins unless everybody wins.

While there is reason for optimism, it’s clear that Europe’s economic recovery is going to take longer than initially expected. Despite some countries being less affected than others, we’re all in it together.