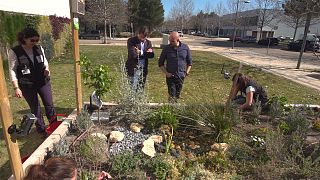 By 2050 around 80% of the world's population will be living in urban areas.

Currently, they occupy 3% of the Earth's surface but produce around 72% of greenhouse gases.

Growing urbanization along with climate change will have a serious impact on our life in cities in terms of air quality, warmer temperatures and higher flood risk.

But solutions to reducing the environmental impact and improving people's quality of life has been found in nature.

Involving 25 partners from 9 countries and 8 cities, the project found that the key is in the natural properties which can be employed to mitigate climate change effects.

URBAN Green-Up project coordinator, Raúl Sánchez Francés, explains that some plants can work as a thermo-regulator and reduce the temperature of surroundings.

"For that, we have solutions like green roofs, mobile vertical garden or green facades."

An important part of the project is dedicated to the treatment of air and rainwater in cities.

Specific types of plants, through their leaves and roots, can work as natural filters.

"That solution is an urban biofilter," says Francés. "We used to call it green chimney. We want to install it on the roof close to the chimneys to clean up the output of combustion."

"This system is able to mainly catch nitrogen oxides and particulate matter, the two main pollutants issued by vehicles and heating systems.

The potential of nature-based systems is significant.

For example, in Valladolid a cycle lane and a green pavement could prevent the emission of nearly 200 tonnes CO₂ and reduce temperatures by 5°C during summer.

But the city’s configuration is a factor to deal with.

"We have to solve some issues, the main one is the lack of space. Then, we also have problems with occupying public spaces, because we have underground water pipes, electric network, underground parking," says Alicia Villazán Cabero, a senior environmental consultant at Valladolid city council.

Liverpool is a city with huge traffic density: 1.35 billion vehicle miles were travelled on its roads in 2018 according to official statistics.

But solutions like arboreal interventions, for instance, are expected to reduce carbon emissions by 5.55 tons per year and temperatures by 2-4°C during the summer season.

"We have issues with air quality in Liverpool. We have a few hotspots around the city so these trees will help us clean up there," says Fernando Nuñez Veiga, the divisional manager for major highways projects at Liverpool city council.

"The trees are just phase one. We have planted 14 trees, the plan is to plant more than 150 trees. That will help to clean up this area."

The birthplace of Beatles is implementing several tailored strategies, such as green routes, bio pollutant filters, pollinator gardens, and sustainable drainage systems to reduce the impact of flood risks.

"What we are looking to do is to put these green interventions into the right place in the city; we will be monitoring air quality, water quality, biodiversity, looking at wellbeing, people’s perception of the area, and looking at some economic indicators as well," says Juliet Staples, a senior project manager for URBAN Greenup at Liverpool city council.

Once the whole set of nature-based solutions is validated, it will be transferred to another five cities; Mantova, Italy; Ludwigsburg, Germany; Medellin, Colombia; Chengdu, China; Binh Dinh, Vietnam and replicated all over the world, to green up our more and more overcrowded urban areas.