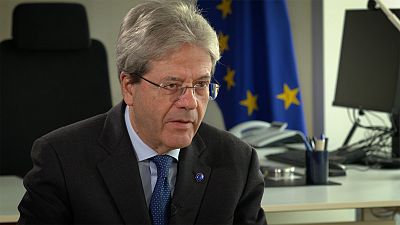 Currently Europe does not have any countries with so-called excessive deficit (over 3% of GDP), but public debt still remains elevated in some parts of the bloc. France, Belgium, Italy, Spain and Greece are among the countries with debt-to-GDP ratios near or above 100%.

The European Commission is responsible for making sure government public spending and borrowing does not exceed certain limits. But it cannot force any country to invest.

With a rising need for investment to boost domestic demand, some European governments such as Germany, the Netherlands and Finland are under pressure to raise their spending as they are the only ones with fiscal space to do so.

Having fiscal space is like having money in the bank which means governments can increase spending or reduce taxes, without undermining the longer-term health of public finances.

But has the time come for a shakeup in European rules on taxation and spending? And why is Germany, for example, facing pressure to spend more?

Germany has a budget surplus of 1.2% of its GDP. This means about €13.5bn of tax money remains unspent - a surplus that is set to last until at least until 2021.

This ‘nest egg’ has been amassed through a very austere fiscal policy over the past few years. Some are now saying a policy that is too austere.

Several voices, including the International Monetary Fund, and the European Commission have recently urged Germany to reduce its surplus and feed the real economy.

Andrew Watt, an economist at Hans-Böckler-Stiftung, says there is no reason why an investment budget of 1% or even 2% of GDP every year cannot be financed by issuing debt.

“This investment would help some of the other European countries, because some of the things Germany needs would of course be imported,” he explains.

One example of German under-investment is the country’s ageing rail infrastructure.

In 2019, several reports highlighted the “huge rail infrastructure replacement backlog” and the need to invest close to €50bn in the sector.

Torsten Westphal is President of EVG, the German Railway and Transport Workers’ Union.

He believes the backlog in infrastructure needs to be cleared and the system needs to be put back on track.

“In concrete terms, this means we assume the number of passengers will increase massively in the coming years,“ he says. “This requires further expansion and a rebuilding of the infrastructure and the same applies to freight transport. Here, too, there has to be a massive shift.”

In response to calls to invest, the German government and Deutsche Bahn have agreed to spend €86bn over the next 10 years on maintaining the railway infrastructure.

But, the railroad sector is just one of many in dire need of public investment in Germany, although this €86bn is a first step towards creating jobs, developing rail freight between Germany and its trading partners and boosting growth.

In addition, given the current concerns over the environment, investment in rail infrastructure could have another positive side by moving passengers away from air travel towards the less carbon dependent train.

On a larger scale, there is now open debate in the EU on the reforms needed to the fiscal rulebook. Paolo Gentiloni is Economy Commissioner and a former Italian prime minister. Newly-arrived in the job, he intends to shake things up.

“It's clear these rules were designed at a time of the most dangerous and severe post-war economic crisis in Europe,” he says. “So now we are at a different moment. We are moving away from six years of continued growth, but at the same time this growth is slowing down. So, we are not looking for a revolution, but I think the rules should be adapted to this new framework, and to this new situation.”

"The point is to have three different targets and goals,” he says. “One is to make these rules simpler because year-by-year they are becoming more complex. Second, we should contribute for example at a point of low growth like the one we are in now to a more expansionary fiscal stance and fiscal policy, and third we need to encourage investment.”

At the moment, the EU Commission can force some governments to limit spending, but it cannot do the opposite. Does the EU Economy Commissioner feel this should change?

“In periods like the one we have at the moment with very low growth, even in some of the countries with huge fiscal space, the Commission has been recommending for several years that this fiscal space be used for investment,” he says. “Not just for these countries, as the knock-on effect of this pro-investment attitude would be felt across all the European Union.”

The European Union is committed to becoming the first climate-neutral bloc in the world by 2050. This requires significant investment from both the EU and the national public sector, as well as the private sector.

Is there an argument for these Green investments to be excluded from deficit rules?

“Exclusion is perhaps too simple a way to describe where we are going.” says Mr Gentiloni. “I think we are going to review some clauses of our rules especially on the flexibility of facilitating investment.”

He says realistically, concrete proposals can be expected in the latter half of this year and he expects member states to be able to come to a compromise on the issue.

Mr Gentiloni is clear that more simplified rules are needed in order to address new challenges in the bloc such as climate change or the need to speed-up growth.

But the biggest challenge remains the same - making sure different members states are on the same page over fiscal reform.