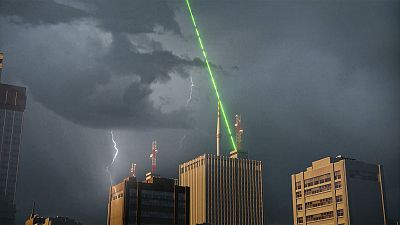 Lightning is one of the most dangerous and unpredictable natural phenomena. Yet the technology to stop it killing people and causing damage has not advanced much since Benjamin Franklin invented the lightning rod three centuries ago.

Every year between 6,000 and 24,000 people are killed worldwide. Lightning also causes blackouts, damage to the power network and electrical appliances, and forest fires that cost billions of euros.

Now scientists working high in the Swiss mountains are developing laser-based technology that could put an end to this threat.

At 2,500 metres, Säntis is the highest mountain of the Alpstein massif in north-eastern Switzerland. Its extreme weather conditions make it a very special spot for scientists who study lightning.

Here an observatory and a network of sensors are constantly recording data on this powerful natural phenomenon, which can be major concern.

Marcos Rubinstein, of the University of Applied Sciences of Western Switzerland, works in a tower that is hit by lightning 100 times a year.

He says his workplace is unique in western Europe, and possibly the world.

Modelling all this data allows scientists to better understand how lightning forms so they can develop a protection system.

Scientists working with the European Laser Lightning Rod project – or LLR - are testing an instrument based on the use of upward lightning discharges initiated through a powerful laser.

The project is based at the Applied Optics Laboratory at Palaiseau near Paris.

"We put a small lightning rod next to our laser through which we guide the lightning and all the electrical charges we get from the cloud, which protects the laser and also brings the current to the earth to protect everything around it."

It’s hoped this kind of laser-based system could one day be easily deployed to protect vulnerable installations, such as power plants, nuclear sites, airports and rocket launchpads, as well as large crowds at sporting and other events.

A new way to communicate for people with disabilties