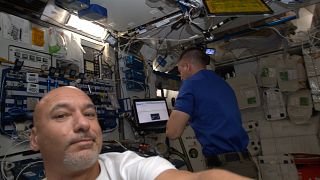 Euronews space correspondent and ESA astronaut Luca Parmitano spoke about his new home onboard the International Space Station (ISS) in his first video from space.

On July 20, the astronaut and his crew took off from Baikonur Cosmodrome, Kazakhstan, aboard the Soyuz MS-13 to venture into space for six months and join their crew members onboard the ISS.

Since its arrival, the crew has been working hard.

“We hit the ground running, so to speak,” said Luca in his report. Jokingly, he continued, “we cannot really hit the ground nor run while we are aboard the ISS, but we were put hard at work from the very beginning”.

Among the assignments making life at the ISS so busy for the astronauts was the challenging task of capturing "a Dragon".

“We are not talking about Game of Thrones, Dragon is a cargo vehicle that brings us new payloads, it brings us everything we need to live onboard a space station, among other things,” Luca explained.

“Together with the cargo we have new scientific equipment, so my crewmates and I have been busy transferring the cargo everywhere onboard the space station so that we can start working on the science”, said Luca, who will conduct more than 50 European and 200 international experiments during his Beyond mission.

Climatising to life in space is no easy feat, he explained.

“Just moving around the space station, moving in microgravity can be a challenge, let alone performing all those daily activities that we take for granted”.

It is the second time that Luca Parmitano has visited the ISS, but it is the first time for some of his crewmates.

On his first mission, Luca spent 166 days in orbit and took part in two spacewalks.