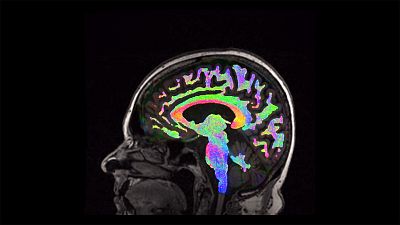 Two and a half million Europeans suffer what is known as a traumatic brain injury (TBI) every year. It is estimated that one in every 200 dollars in the world is spent on the care or the consequences of such injuries. In this episode of Futuris, Euronews' Jeremy Wilks meets doctors from across Europe who have joined forces as part of a European project called Center-TBI aimed at improving treatment for patients.

Bart suffered a traumatic brain injury when he had a car crash on a Belgian highway in March 2015. His story highlights the complexity of the disease, and the challenges in treating it. While the physical injuries to his lower body were treated, the emergency room did not detect his brain injury, and he only became aware he had a problem when people around him said his behaviour had changed.

"I was always very quickly agitated, even on the border of getting angry very soon and very quickly, and I was not who I was, explains Bart. "But I initially didn't want to believe it, until the physician told me that it was quite normal and it happened more often than people in general think."

Bart's case was followed by brain injury expert Professor Andrew Maas, coordinator of Center-TBI, a large European project that aims to improve the care for patients with traumatic brain injury, known as TBI.

"Thankfully he (Bart) got appropriate care and treatment, and he made a full recovery. But for other patients, who do not get that care, those symptoms may get worse," Maas says.

Cases like Bart's are being studied by specialists from across Europe who are uniting under the EU supported Center-TBI project.

Experts meeting at the University of Antwerp agree urgent action is needed.

"We've had no new treatments for traumatic brain injury in the last 40 years. So we really needed to get together as researchers across the continent to study this pathology and really get a better understanding of what's driving this huge burden of death and disability for our patients," says Fiona Lecky, an Emergency Physician from the University of Sheffield.

The Centre-TBI project team is studying 4,500 traumatic brain injury patients in 19 countries. The scope is broad, as the experts examine patients of different ages, contrast urban and rural healthcare, compare emergency responses, and evaluate how patients are followed months after injury.

The Centre-TBI study comes as perceptions around traumatic brain injury change. It is now seen as a chronic disease, with a high cost to society.

David Menon, a consultant in neurointensive care at the University of Cambridge, says: "It's a huge problem for the individual, it's a huge problem for their families, because these are patients who don't just have an inability to move an arm or a leg, they may have trouble with thinking, understanding, communicating, re-integrating into society. It's a problem for society, and for global society, because one in every 200 dollars that the world makes is spent on the care or the consequences of traumatic brain injury,''

A promising approach is to use magnetic resonance imaging, or MRI, to help spot injuries earlier and give doctors fine detail on how brain tissue is damaged. It is expensive and complex, and is not part of current traumatic brain injury diagnosis, but it could make a big difference.

"CT (Tomodensitométrie) imaging is good for detecting bleeding or detecting bone, but the tissue contrast is much much better with MRI," says Jan Verheyden, at VP Traumatic Brain Injury, Icometrix

"Probably the greatest step forward I think we will be able to make is in the healthcare management, and in the strategy of treatment," insists Maas.

Bart was given drugs and psychological help to recover. He will continue to help the Center-TBI doctors, who release their conclusions in April 2020.

Women in Science: Five countries that beat the gender gap

Why we find change so difficult, according to neuroscience