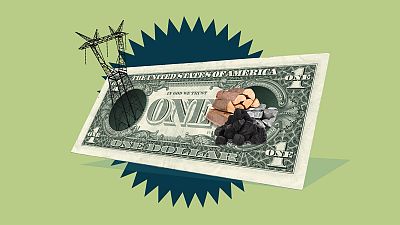 As the euro celebrates its 20th anniversary, we take a look at how the single European currency compares to the dollar **– **still the dominant world currency.

More than half of all non-EU imports (55.4%) were invoiced in US dollars in 2016. At the same time, just a third of goods (34.4%) brought into the EU were priced in euros. The three sectors the US dollar dominates are: energy, raw materials and transport.

When it comes to energy, more than 80% of Europe’s imports are priced and paid for in US dollars, despite supplies coming mainly from Russia, the Middle East and Africa. That amounts to €240 billion of the total (€300 billion) energy bill over the last five years. The situation is similar when it comes to raw materials and the food commodity markets.

Bitcoin plunges below $5,000 amid rough 2018 for cryptocurrencies