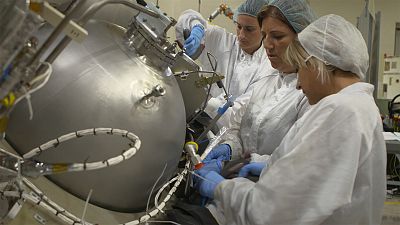 Euronews had a unique chance to visit the Avio rocket factory, situated in Colleferro, just south of Rome, Italy, where engineers are lovingly crafting the next generation of carbon fibre European launchers.

The site is one of the very few space rocket factories in Europe. It's the place where the lightweight Vega launcher was born, and where the launchers of the future are being created.

Ettore Scardecchia, Head of Product Engineering at Avio explains what they do: "The casings of the first, second and third stages of the launcher are made here. These casings constitute the load-bearing structure of the motors. We start from the raw materials: the rubber and carbon fibre comes in, and the rocket casings come out ready to be loaded with propellant."

Most big space rocket bodies are made from metal, but Avio uses carbon fibre for the Vega. It does so with a unique, patented winding technique.

The goal is to have maximum bang for your buck, as Scardecchia says: "The key parameter in this design is its light weight, because, obviously, to get into orbit a rocket has to have a lot of power but it also has to be as light as possible."

Watch a launch, and you can see what Vega can deliver in terms of sheer pace off the launchpad. Solid propellant rockets can't be throttled back once ignited, but they offer enormous thrust right from the get go.

"It's an extremely fast and quick rocket to lift-off because it's very light, it's relatively light with respect to the thrust that it gets at lift-off," says Giorgio Tumino, Vega and Space Rider Development Programmes Manager at ESA,  "So it is really like a tremendous emotion and impression that you get."

The long and winding road to making a Vega

Vega rockets may shoot off the launchpad, but building one is a slow and careful process. It takes a year to go from raw materials to launch.

The first step is to use a kind of giant tube-shaped mould, called a mandrel.

Massimo Epifani, Production Manager at Avio, explains the long and winding road to making a Vega: "To make a rocket motor in carbon fibre you start with a piece of equipment called a mandrel. It is made of many metal pieces assembled together, and with the rotating part of the machine, we wind the carbon fibre.

"During the operation, a rocket motor reaches over 3,000 degrees Centigrade, so to protect the structure from these high temperatures we fabricate a thermal insulation which is this very thin rubber, and that's the first thing applied to the mandrel," he says.

"Then we start with bobbins. It is pre-impregnated carbon fibre with epoxy resin, which is an Avio patent. And with this material, about 5,000 kilometres-worth of this filament, we wind the carbon fibre structure on to our mandrel."

Avio has just used that carbon fibre-winding process to create the P120C, the largest rocket engine of its kind ever made.

The P120C is important, as it will be the first stage of a new, more powerful version of Vega, called Vega C.

It has just passed a static fire test at Europe's spaceport in French Guiana.

The same engine will be used in the forthcoming Ariane 6, in a drive to head-off competition from India, China and the US.

Tumino gives us view from ESA: "In an aggressive manner we are trying to make things more and more competitive."

"One of these examples is the P120C solid rocket motor, which we are developing across two programmes, the Vega C and Ariane 6."

This enables the possibility to harmonise resources and to have the same motor serving the Vega C as a first stage as well as the Ariane 6 in both configurations as strap-on boosters."

With the first Vega C launch planned for 2019, there's another effort underway to upgrade the rocket's upper stage.

This is the part of the rocket that actually flies through space and delivers the satellites into the orbits that customers have asked for.

It's the only stage that uses liquid fuel, meaning it can be turned off and on again, unlike the solid propellant engines.

Irene Cruciani, Head of Systems Engineering at Avio, explains: "On Vega C we developed the fourth stage so that it can carry satellites with a much larger mass compared with Vega now, and it's capable of restarting several times. This allows a lot of flexibility in the new launcher, which can launch satellites from the very small 'cubesats', weighing just a few kilos, to those weighing 2,500 kilos, which is very big for our launcher."

With the lightweight Vega, mid-size Soyuz and heavyweight Ariane 5, ESA's range of launchers can now reach any orbit from French Guiana.

And Vega, the youngest member of the family, continues to make its engineers' hearts leap every time it flies off the launchpad.

Cruciani adds: "The first flight was an unexpected success because it was a first for the team, so for us, it was very surprising and beautiful to see that - from the first flight - the performances were excellent. "

Scardecchia says you never forget your first lift-off: "The power that comes out from inside the engine, both in terms of the flames coming from the nozzle and the deafening noise surrounding the launcher and the engine is really exceptional. And the first time is like your first love, you'll never forget it!"

This Japanese space probe just arrived at an asteroid

The sky is no limit: Your space questions answered at #Ask Space

'Boom, we have an answer!' - Gaia's revolution in astronomy

Surfing scientists and algae hunters use Sentinel-3 to study coastline