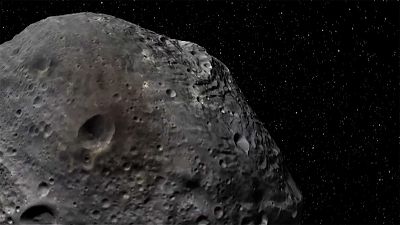 Asteroids pose a risk to our planet, and you only need to visit a museum to see the proof. Sixty six million years ago things were going just fine for the dinosaurs, until one day, a large and fast-moving space rock crossed paths with the Earth.

"This is something that happened in the past, and of course it will happen in the future again."

"The asteroid was just ten kilometres, but the resulting crater was 200 kilometres," explains Christian Köberl, one of Europe's leading asteroid experts, director of the Natural History Museum Vienna, and Professor at the University of Vienna.

"So that tells us about the enormous energy that's involved in such a case. And that energy is like a gigantic explosion, earthquakes happened, all kinds of nasty things, so the climate changed immediately. And what that meant is that a lot of the animals and plants at that time, almost two thirds became extinct, about two thirds of all living species on our planet became extinct," he says.
The killer blow came from mountain-sized lump of silicate rock, iron and nickel left over from the formation of the solar system. It's the threat from these kinds of civilisation-ending asteroids, and their city-smashing smaller brethren that the international community is now trying to find ways to mitigate.

Large asteroid strikes are very, very rare. However, there are many reminders of the damage a smaller asteroid can do in recent history. International Asteroid Day itself is placed on 30th June every year to mark the anniversary of the Tunguska Event, when an asteroid exploded over Siberia and flattened 2,000 square kilometres of forest. In 2013, an asteroid just 20 metres across, exploded above the Russian city of Chelyabinsk, injuring 1,500 people, mostly from broken glass.

​At the Museum in Vienna we met up with Ludovic Ferrière, Meteorite Curator, who showed us a piece of the Chelyabinsk asteroid.

"When we cut it open we can see the history of this meteorite," he says.

"You can see the original part, which hasn't been much changed since its formation, and which will tell us about the solar system. And all the black part, that's from a series of impacts that it has had between its formation 4.56 billion years ago and today."

Its history of impacts deep in its past meant the Chelyabinsk asteroid exploded in the atmosphere, rather than hitting the ground and causing a great deal more damage.

The NHM in Vienna is home to the world's largest display of meteorites, and shows just how varied they can be in terms of structure, with some being almost solid iron, while others are a loose amalgam of silicates.

Exactly where they land is also a factor in how much damage they cause. A house-sized space rock can destroy a forest, create a tsunami, or even alter our atmosphere, as asteroid researcher at the University of Vienna, Lidia Pitarello, explains: "In the case of a shallow sea, and it depends on the type of sediments that we have on the bottom, then a lot of greenhouse gases can be released, by the vaporisation of the material, and then it can really affect the climate on the long term."

​What's being done to protect our planet from asteroids?

​At ESA in Darmstadt, Germany, the Space Safety team is working on developing an early warning system, particularly for the more numerous, smaller asteroids. A two metre space rock was filmed by farmers Barend Swanepoel and Vicus van Zyl over South Africa in early June, exploding in a bright flash in the sky.

​"That’s what we want to observe, because if it’s a bit bigger, maybe 5 metres, then the shockwave can create a significant damage on the surface, and that’s what we want to inform the people about, beforehand," says Rüdiger Jehn, Near Earth Object Segment Leader at ESA.

Rüdiger currently pilots a telescope in the hills west of Madrid to spot unknown asteroids, but will soon be using ESA's new Flyeye telescope, to be installed in Sicilly, and specifically developed for the task of observing near Earth objects.

The Agency is already monitoring 740 asteroids that carry a small risk of hitting Earth, and finds new ones all the time.​

"We currently have a detection rate of something like 200 asteroids per month, and maybe 3, 4 or 5 of them are objects which might hit the Earth," says Jehn.

"There’s none which is really a serious threat, which we currently know of. There’s plenty of things out there which we have not yet detected, which we are still searching for, but from what we know right now there’s nothing which we really have to worry about."

Mascot to land on an asteroid

​It's good to know your enemy, and there is lots of activity in the space sector to boost our knowledge of asteroids.

ESA is developing the Hera/AIM mission to follow NASA's AIDA asteroid redirect mission in the coming decade, while both NASA and Japanese space agency JAXA have missions to visit asteroids this year.

The Japanese spacecraft, Hayabusa-2, will orbit its target asteroid this summer and drop a German lander called Mascot onto its surface.

​Ralf Jaumann from German Aerospace Centre DLR is behind the Mascot project, which is jokes 'looks simple, but is not simple'.

​
The mission will help feed engineering concepts on how to deviate a potentially threatening asteroid away from Earth. Unfortunately, you can't just blow them up, like in the movies.

"You cannot destroy asteroids by atomic weapons or something like this," says Jaumann. "So you really have to know it. The composition is most important in order to understand how you can push it away, how you can stop its rotation and get more radiation on one side and that push it away from Earth. So, knowing the composition and knowing the physical properties will help a lot in order to investigate mitigation strategies."

​
So, efforts are underway to prevent us from being the species that ends up in the museum. ​The consensus is that 90% of the large, civilisation-ending asteroids have been found and tracked. However, only a few percent of the smaller ones, from 5 to 500 metres, have been identified.

Right now there's no imminent threat, but it's important to underline how a relatively small asteroid can have a catastrophic effect. An object as small as 100 metres in size would wipe out a city the size of Vienna if it made a direct hit.

And if you're still skeptical of the risk, then look up, says the NHM's Director, Christian Köberl.

"We just need to look at the Moon, our next object in space, and see that it's totally covered by impact craters. We don't see that so well on the Earth because the Earth has an active geological surface, but it happens all the time that we are being bombarded by objects from space. Large ones and small ones. The larger ones are a little more rare, the small ones happen all the time, and this is something that happened in the past, and of course it will happen in the future again."

Can we deflect asteroids?

Accidents and asteroids: Addressing the threat