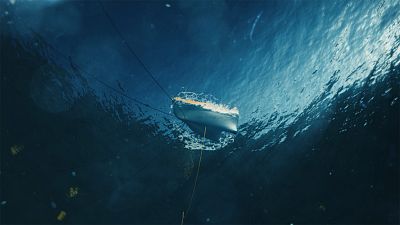 It is known simply as 'The Penguin'.

The intriguing name belongs to a platform floating on the Atlantic Ocean off the Orkney Islands, which is at the forefront of exciting moves to harness the power of water.

'The Penguin' can produce energy thanks to the movement of the waves, as 'Futuris' reporter Julián López Gómez discovered when he visited the islands off the north of Scotland.

With 75% of the earth's surface covered by water, wave energy has huge potential.

The Orkney Islands are something of a wave paradise. So they were a logical location for installing and testing a prototype aimed at turning the motion of waves into energy.

"When the wave is passing it, the hull starts rotational movement - the asymmetrical hull," explained Timo Lotti, Automation and Electrical Engineer with 'Wello Oy'.

"Inside the hull, there is the eccentric mass which starts to follow the hull movement."

This movement, he added, is coupled with a generator, which also starts to rotate.

"So wave movement is converted into continuous rotation inside 'The Penguin'."

Installed in spring 2017, the prototype is anchored to the sea bed, 50 metres deep.

"We have had peak waves in the last winter of 18 metres and extended periods of ten metres significant wave height. And it has been fine," said 'Wello Oy' Control Engineer David Cousins.

Submarine cables drive the harvested energy to a plant, where it is stocked and later fed into the local grid.

"This site is able to cope with 7 megawatts of electricity production on site. Each cable (coming here) can take up to one megawatt," said Lisa Mackenzie, Commercial Manager with the European Marine Energy Centre.

"The important thing about being able to feed electricity into the grid is that it means that the developers can earn a return for any electricity that they produce during the testing period."

'The Penguin': A Game Changer

The whole system is controlled from labs at the Orkney campus of Heriot-Watt university. Fibre optics help 'The Penguin' send data to control engineers.

"We have got probably 40 or 50 instruments (onboard 'The Penguin') that we sample very quickly," said Wello Oy's David Cousins.

"And we have also got controlled information but then we receive data. We use fairly standard accelerometers. That is telling us what the hull is doing, and the accelerations and in what direction."

Researchers here see 'The Penguin' as a game changer in a market of wave energy estimated at some 74 billion euros.

"Once all these sources and all these technologies are in use, in full use, I think the whole of Europe and not only Europe but the world is going to be a whole different place," said 'Wello Oy' Chief Operating Officer Timo Lotti.

This is just one of a myriad of projects funded by the European Innovation Council initiative, aimed at giving a boost to the European Union's most promising innovations.

According to some data, 85% of productivity growth in modern developed economies is the direct result of innovation.

However, European companies still spend less on Research & Development than other global competitors.

If the share of scale-ups in Europe matched that of the US, in 20 years it would create up to 1 million new jobs and add 2,000 billion euros to EU GDP.

With that in mind, the European Innovation Council pilot has 2.7 billion euros to fund innovators and researchers to scale-up their latest innovations in very different fields.

On the right track of economic development

Another of these innovations aimed at shaping our future is inside a 30-year-old locomotive in Latvia.

'Futuris' reporter Julián López Gómez travelled to Riga to see the old diesel train which has been given a new lease of life, after being retrofitted to also run on natural gas.

Researchers hope their efforts will help keep the European railway industry on the right track of economic development.

A few days are all it takes to install the 25 or so mechanical components allowing the locomotive to switch from diesel to natural gas.

Researchers say the retrofit enables a reduction of some 15-20% in emissions of carbon dioxide and more than 30% of nitrogen oxides, thanks to a complex network of innovative devices.

"The dual gas diesel platform is made up of different components - the gas storage and gas reducing systems to start with," said Nikolay Volev, Mechanical Engineer with the Digas Group.

"We also have an electronic solution to manage diesel fuel and gas fuel supplies. And it has a telemetry platform. What's more, we should mention the safety systems including fire safety and the detection of any gas leaks."

Researchers say the system has been designed to allow operators to pay off their retrofit investment in about 3 years, mainly due to a reduced diesel bill.

"Fuel costs contribute up to 50 percent of all operational costs for railway operators," he said, adding that the substitution of diesel fuel with natural gas can translate into a 40% increase of fuel cost savings.

Hybrid diesel-natural gas locomotives present plenty of challenges. For instance, their engines are prone to increased combustion pressures and temperatures. So engineers had to come up with sophisticated mechanical and software solutions.

"This data will help us reduce maintenance time and improve efficiency, while using other locomotives. The system also has an Artificial Intelligence platform designed to spot and transmit any problems in the engines that can´'t be identified by other means."

Existing diesel locomotives are equipped with inefficient engines. And, in Latvia, complete electrification of the railways would require huge long-term investment. So the Latvian Railway CEO says he sees this and other technologies as a promising, cost-efficient starting point to prepare the sector for a highly competitive future.

"We face stiff competition not only from road transport, but also from other railway companies," said Edvīns Bērziņš, Latvian Railway's Chairman of the Board.

"So we definitely need to invest in new innovative technology that can give us an edge and make us more competitive."

Some 100,000 tons of wood chips are used there every year to produce energy and a highly innovative technology is currently being tested to improve efficiency and competitiveness in the sector.

The power plant uses wood chips to produce energy, providing heating and hot water to the 20,000 or so inhabitants of the town of Norrtälje.

Wood chips come from very different places. Some are bark chips. Others are root or branch chips; the quality varies tremendously. Often their energy value is low. Sometimes they are too wet. And other times, problems are even more dramatic.

"This is an example of the issues we usually face here," said Tommy Kindblom, Managing for District Heating with Norrtälje Energi, as he held a large solid object.

"This is ash, remaining after the combustion of wood chips full of dirt, sand or stones. Ash from those wood chips turns into a sort of glass that can damage the functioning of our whole system. This situation forces us to carry out costly maintenance work and can even eventually lead to the interruption of our energy production, because we need to stop combustion activities to clean up the boiler."

European researchers have installed a biofuel analyser there. One minute is all it takes to estimate the moisture and ash content of wood chips, their energy content and also any presence of sand or stones. A specialist laboratory would require several days to gather this data!

"It is an economic issue," said Karl Wejke, Sales Manager with Mantex.

A key challenge, researchers say, was how to calibrate wood chips, so that the analyser provides accurate, reliable data.

The system is based on x-ray beams that can identify materials like sand or stones, with higher densities than wood.

"It can be anything that looks from ordinary wood chips almost to dirt. And to calibrate this is kind of complicated because you have to calibrate for a lot of essentially very different types of materials. And this laboratory enables us to get our own samples and to do this calibration."

The next step, researchers say, is to install such analysers on conveyor belts for faster checking of larger volumes of biomass.

Lower operational costs could translate into cheaper energy prices, according to managers at this power plant.

"The analyser could help us save between 100,000 and 150,000 euros per year, as we would be able to produce more energy and reduce our maintenance work," concluded Tommy Kindblom, of 'Norrtälje Energi'.

Developers say the same analysing technology could be applied to other raw materials being used as biomass around the world, like rice husks or cereal straws.