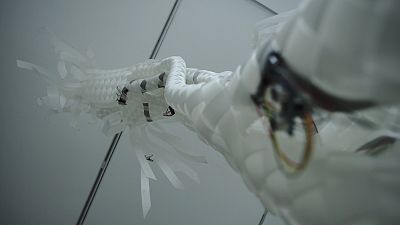 Imagine living in a house built not with bricks or concrete, but out of a structure created through the interaction between plants and robots, with some help from sensors, LEDs and computers.

Such a house, with current technology, would take 40 years to grow.

But biologists, computer scientists, robotics researchers and architects at Flora Robotica are already working on its foundations.

We proudly present our official project videohttps://t.co/uwPcBlxFvq
Learn how we plan to use #robots and #plants to build green cities. pic.twitter.com/LJlIAcNzMq

Scientists from the European research project are studying how robots and plants can interact to build architectural structures – a futuristic vision of hybrid symbiosis whose mechanisms are just starting to be understood.

Mostafa Wahby, a computer scientist from the University of Lübeck, told Euronews: “The plants are attracted by blue lights. Each small robot has 6 LEDs. By producing blue light, they attract the plants, and they can define the plant’s growth in certain directions.

“The robots also can sense when plants are approaching and then they can communicate between themselves, making another robot emit blue light to attract the plants in another direction”.

But his colleague at Lübeck University, Heiko Hamann, who is Project Coordinator at Flora Robotica, said the possibilities don’t end there.

“On the other hand,” he said, “the robot can take additional sensor data out of the plants.

“If the plant is a bit older, the robot can sit on the plants when they have a sturdy structure and the robots can observe everything from there”.

At the moment the research is its early stages.

While plans to build skyscrapers and tower blocks out of raw plant matter may, at this early stage, appear grandiose.

Researchers want to find the right conditions for robots and plants to cooperate to form self-organizing, self-growing structures where people could eventually live.

A key issue is how to teach robots to grow structures independently.

Mohammad Divband, another computer scientist at the University of Lübeck, said: “We take natural plants as a reference point. Plants grow as they move towards the light. We want to know if we can repeat this same behaviour with the use of robots. We want robots to assemble together in order to coordinate autonomously among themselves to build up structures directed towards the light.”

In Denmark, a country at the forefront of green innovation, a group of Copenhagen architects are looking for ways to turn those hybrid robot-plant structures into living spaces.

And some ideas are already popping up.

Architect Phil Ayres from the Danish Centre for Information Technology and Architecture told Euronews: “We are looking at braid systems. They are a method of construction that can allow a continuity of construction.

“We can just simply keep braiding, or un-braiding. We can connect across very easily. We can go from a series of columns to actually defining a roof”.

Architects are even anticipating whether such structures could be manufactured in cost-efficient ways.

So they are studying how to automatically shape very different pattern with various materials.

An alternative to plant matter is glass fiber – a strong but flexible material consisting of numerous extremely fine fibers of glass.

It is much cheaper and far less brittle than carbon fibre, and can be used to form any number of shapes rapidly.

Scientists say automated urban gardens and living spaces based on these hybrid robot-plant structures could become a reality in 20 or 30 years.

FUTURIS | One day you could be living in a house made from plants and robots… ???