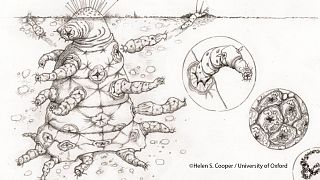 It’s a perennial question for science fiction writers and movie directors, and it’s both inevitable and obvious: What do aliens look like?

It might seem a silly query, akin to asking Epicurus to foresee the details of fine dining in the 21st Century. Nonetheless, and despite its speculative underpinnings, a rudimentary answer could help guide the real-life search for extraterrestrial intelligence — in addition to being useful for novelists and filmmakers.

One response has just been offered by zoologists at the University of Oxford. In a paper published online Nov. 1 in the International Journal of Astrobiology, they note that evolution, the constructor of all species on Earth, should operate on E.T.’s home planet as well. Their bottom line? Aliens may be “more like us than we think.”

Most of us probably already believe that space aliens are a lot like us. We’ve been pickled for decades in the brine of Hollywood’s images of extraterrestrials. Diminutive, colorless, big-eyed humanoids, these putative inhabitants of faraway worlds look like unfortunate neighbors who got caught in a nuclear accident. These imaginary creatures also share our preoccupation with sex, routinely shanghaiing us for breeding experiments or irksome probing. They’re scarcely more varied than Hollywood’s depictions of cowboy villains.

How to do better? The Oxford team correctly notes that evolution is not about goals, but simply about survival. If a species works — which is to say that it reproduces successfully — then there’s no reason for Nature to tinker. Only a dramatic change in either external circumstances (a global freeze, for example, or an asteroid impact) or increased competition among existing organisms will provoke a major transition. 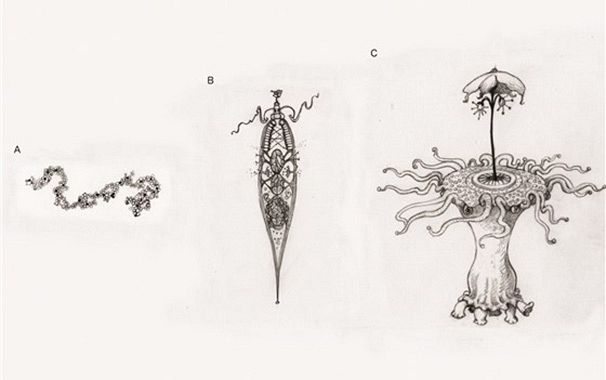 These illustrations represent different levels of adaptive complexity we might imagine when thinking about aliens. ©Helen S. Cooper / University of Oxford

Consider that microbes ruled Earth for three billion years until these highly individualistic organisms could successfully subdue their “me, me, me” lifestyles to join with other cells to make more complex life forms.

One consequence of this line of argument is that intelligent extraterrestrials — the only ones that could build radio transmitters, lasers, or anything else that would allow us to find them — would also be the product of a small number of major transitions that brought together previously independent organisms. They would be composed of existing subsystems, just as we are. For example, our arms and legs were once the fins of fish.

Though interesting, this proposition doesn’t really answer the question of E.T.’s appearance.

Imagine visiting a very Earthlike planet — namely, Earth — 400 million years ago. Among the multicellular fauna of that age, small marine arthropods we call trilobites took top billing. These extinct creatures don’t look much like the animals you’ll find at the zoo today, although there are still plenty of arthropods around. Or picture a visit to Earth a mere 100 million years ago. You’d encounter a lot of really large, feathery lizards. They don’t look like you, me, or your cat.

Acknowledging that evolution probably operates on any world where organisms compete with one another and resources are finite doesn’t really help us picture the aliens. A more productive approach might be to consider the mechanisms of what biologists call convergent evolution: similar environmental circumstances usually lead to similar evolutionary forms. If we assume that the rise of diverse plant and animal life requires the presence of liquid oceans, thick atmospheres, and the occasional land mass, then these stage props inevitably shape the action. Ocean predators will have streamlined bodies; land dwellers are more likely to have legs than wheels. Happenstance and the specifics of the environment will produce variations on an alien species’s planet as it has on ours, and there’s really no way to predict these.

Alas, an accurate cosmic bestiary cannot be written by the invocation of biological mechanisms alone. We need data. That requires more than simply thinking about alien life. We need to actually discover it.

And judging by the diversity of critters that have populated Earth, I’d say that the real aliens may prove to be less like us than we think.