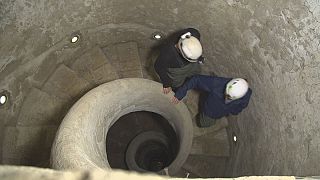 Earth is the largest rocky planet in our solar system, and the only body we know of capable of supporting life. With so much news about exoplanets dominating the headlines, we take a step back to take a look at Earth as a planet.

"At the moment the magnetic pole is migrating with about 40 kilometres per year, possibly taking us to a polar inversion."

Four and a half billion years old and 149.6 million kilometres from the Sun, it’s not like anything else in the solar system: “Planet Earth is quite a particular planet,” says Josef Aschbacher, Director of Earth Observation at ESA. “We have 70% of water, we have land masses which are actually moving over time. We have an atmosphere which is rich in oxygen, nitrogen, in water vapour. All of these are necessities in order to have life on a planet like this.”

Rome is a perfect spot to look at the defining characteristics of planet Earth, in particular the presence of liquid water. Our home planet has the right temperature and correct atmospheric pressure for water to flow on its surface, making it so hospitable to life.

Below the Villa Medici in the heart of Rome we visited the Aqua Virgo aqueduct, the only one to be in constant use since Roman times, and the bearer of water for the Trevi fountain.

Gabriele Scarascia-Mugnozza, Professor of Engineering Geology at University of Rome ‘La Sapienza’, came with us a pointed out the crucial role water has had even deeper underground. “Water is a very important component in the formation of magma, and an important component in all the processes to form rocks, be they volcanic or metamorphic or sedimentary. So for that reason it has been really important in the evolution of our planet Earth,” he says.

They call Rome the eternal city, and its ancient monuments may look like they’ve been there forever. Yet the building materials the Romans used are materials that once flowed as molten rock beneath the Earth’s crust.

“Rome is to a great extent constructed from volcanic rock. The famous ‘seven hills’ are made from this kind of rock, called ‘Tufo lionato’, thanks to its colour which looks like similar to the colour of a lion’s mane,” explains Scarascia-Mugnozza.

Everything we have used to forge our civilisations comes from the Earth below our feet, and if you look at it closely, just three key ingredients dominate, he tells Euronews: “Our planet is mostly made from iron, silicates and oxygen. They make up three quarters of the material that we find on Earth.”

The ‘third rock from the Sun’ is 12,742 kilometres in diameter, a little bigger than Venus, and twice the size of Mars.

It’s worth bearing in mind that much of our knowledge of Earth is very recent. When the historic globes at the Italian National Institute for Astrophysics were made 500 years ago some were still debating whether the Sun orbited around the Earth.

Nichi D’Amico, President of INAF (Italian National Institute for Astrophysics) puts it into context:
“All the comprehension about how the solar system works, so how a solar system in general works, is obviously quite recent,” he says. “We’re talking about Galileo and Newton, and then all the others. Obviously this gave us a completely different point of view. In ancient times we thought that the Earth was at the centre of the universe, and now instead we know that the sun is at the centre of a planetary system, which is at the outskirts of a galaxy which in turn is at the outskirts of a remote part of the Universe. This immediately gave us a different vision of where we are and who we are.”

Our vision of who we are and where we are gets clearer every day thanks to space technology. Right now ESA has 15 Earth observation satellites, feeding data to its centre near Rome. They offer a global view on everything from soil moisture to gravity, and they’ve even spotted a subtle shift in the magnetic poles.

Michael Rast, Head of Earth Observation Science Strategy at ESA, explains more: “At the moment the magnetic pole is migrating with about 40 kilometres per year, possibly taking us to a polar inversion. Long overdue – we haven’t had one for over 700,000 years – and the poles may flip in the coming few thousands of years.”

Even the most remote areas of our planet can be measured with unprecedented accuracy from space. Cryosat, launched in 2010, has now shown the true impact of our warming climate on the polar regions.

“We had the warmest pole Arctic summer last year. And we are losing polar ice rapidly. At the moment we lose almost 125 cubic kilometres of ice per in Antarctica every year and three times as much in Greenland,” says Rast.

Earth is a very dynamic planet, and many of the changes we see are part of natural cycles. Yet it’s become clear since the last century that mankind is now having an impact on Earth, our greenhouse gas emissions are altering the climate.

“We changed the planet. It’s a fact,” concludes Aschbacher. “The question is how can we best understand what happens and possibly avoid the biggest damage in order to not destroy it completely.”