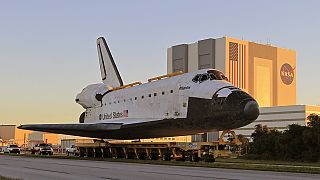 The Space Shuttle programme flew 135 missions from 1981 to 2011, setting many records and inspiring generations. Here are five reasons why it has become a Legend of Space.

1) The Shuttle was the first reusable spacecraft

You might have heard a bit of buzz around SpaceX and how its reusable rockets are changing space history .

But hang on a minute, the Space Shuttle was doing the whole reusability thing way back in the 1980s, and many, many more times than Space X. Just think about it – Discovery, the most experienced Shuttle, went to space 39 times in the space of 27 years.

A lot of this durability is due to its unique design. NASA’s space shuttles were made to launch skyward like a rocket, heading straight up, and returned from its mission like a glider, skimming through the air by means of its ‘wings’.

Most of its components were reusable. Even the rocket boosters, which were released at 45km after launch and fell into the ocean, were retrieved and refurbished for the next mission. The only exception was the giant central fuel tank which, when released at around 113km from Earth, burned up as it descended through the atmosphere.

The Hubble Space Telescope has opened our eyes to the universe, but it would have been left almost blind had it not been for the Shuttle. From black holes, to foreign galaxies and exoplanets, Hubble’s contribution to our knowledge of space today is undeniable.

However, if the HST is now an astronomical icon it was the Shuttle programme that made sure the telescope could see where it was being pointed with a series of crucial repair missions. Hubble was deployed by the Discovery Space Shuttle on 24th April 1990, the spacecraft leaving the 11,000kg telescope in orbit 612 km from Earth.

However, not so long after being put in place, it was found that one of the mirrors was faulty and the images being transmitted weren’t as clear as they should be. The $2.5 billion space telescope, the pride of astronomers, couldn’t see clearly, and needed a hardware fix in order to deliver on its astronomical promises.

Endeavor, with seven astronauts including ESA’s Claude Nicollier on board, set off to save it in December 1993, installing two devices that stopped the mirror giving fuzzy images. Three more Hubble servicing missions were completed, upgrading Hubble to give it technology that wasn’t even available when it was first designed in the 1970s.

3) The Shuttle built the ISS

The International Space Station is the biggest structure ever to be built in space, and it wouldn’t have been made without a succession of Shuttles bringing hardware into orbit. Its modules were mainly delivered thanks to the Shuttle programme, which sent 27 missions to the ISS from 1998 to 2011.

Shuttle astronauts also participated in the station’s assembly with the help of the Canadarm or Shuttle Remote Manipulator System: a robotic arm designed for Shuttle to deploy, handle and grab payloads. This arm was so useful for the Shuttle missions that a second one was designed and built for the ISS.

The ISS remains an ‘international’ effort, of course, and it has always been serviced by spacecraft from Russia’s Roscosmos, Europe’s ESA and Japan’s JAXA, but the Shuttle had a central role in its development from project to reality.

The Space Shuttle is probably the coolest-looking spacecraft ever made. Others, like Sputnik and Curiosity, are close rivals, but the Shuttle puts its distinctive nose-cone ahead of the crowd by virtue of its winged and aerodynamic shape.

At launch in 1982, this looked a lot like the future you had read about science fiction magazines. This is the spacecraft that children pinned on their bedroom walls, the spacecraft that you tried to build from Lego, the spacecraft that populated the skies of your colourful alien planet drawings at school. If someone told you that NASA had secretly smuggled an alien back to Earth in its payload bay, you might have believed them.

When the Shuttle was poised for take off it looked improbable, pinned to the side of that massive rusty brown External Tank, with two extra Solid Rocket Boosters tacked on the side for extra bling. At lift off the sound and light show was just as good as any other rocket, the epic rumbling from the engines etched deep in the memories of all those who saw it fly.

Once in space it became a Swiss Army knife, opening its doors and plucking satellites from orbit with its Canadarm robot arm. Then, for re-entry, it became a proper space plane again, carving its way down from space to the runway in giant turns and then dropping to the tarmac like a swan landing on a lake.

Viewed front on, its nose wheel perfectly in line with the white line of the runway, its haunches rising high behind, it looked almost animal. Its flanks, scarred from the heat of re-entry, gave it a heroic air, and all the while the American radio chatter added an exotic mystique reminiscent of the best action movies.

5) The Shuttle had two deadly accidents

Fourteen astronauts were killed in the two Shuttle accidents. The first came in January 1986 when Challenger exploded over Cape Canaveral in Florida, the second happened in February 2003 when Columbia broke apart during re-entry over Texas.

The Shuttle accidents rocked NASA and the American public’s faith in human spaceflight, and the second accident is partly the reason why the fleet was retired in 2011. The first accident in the 80s was shocking as it happened just 73 seconds after lift off in front of a very large live TV audience.

The tragedy was amplified by the fact that Christa McAuliff was on board, a school teacher selected from 11,000 applicants to be the first non-astronaut in space. The launch was watched by millions of American school children and had larger than usual media coverage due to her being on board.

Challenger exploded because an O-ring seal on one of the boosters failed, leading to the main fuel tank exploding. The second accident saw debris scattered over Texas and Louisiana. It happened because Columbia’s left wing had been gashed by fuel-tank insulation foam during launch, and the heat-resistant tiles on its wing had been damaged, allowing hot gases to penetrate the spacecraft and break it apart.

Orbit around these quick Shuttle facts and figures