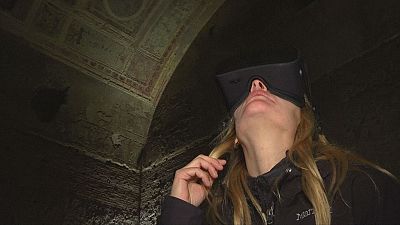 The Golden Palace in Rome, built by Emperor Nero is getting the virtual reality treatment. Put on a headset and you will be whisked back in time to the lavish rooms of his opulent home.

It is all underground and possible to see the colourful frescoes as they once were or to take a peek at Nero’s gardens and pools.

Using Virtual Reality (VR) goggles to allow visitors to the remains of Nero's Golden Palace in Rome to see how it… https://t.co/nbRCfIbmxU

The palatial complex was built to Nero’s orders in AD 64 after the fire that razed Rome to cinders. The inferno has often been blamed on the emperor’s extravagant madness. This virtual tour will give you a sense of what the Golden Palace was really like.

“Wearing special Oculus headsets, you will find yourself inside the Golden Palace during the time of Nero. You will re-live the whole story of it getting buried and then re-discovered,” explained Alessandro D’Alessio, Technical and Scientific Director, Domus Aurea.

Named after the gold leaf covering some of its walls, the palace was the centerpiece of a sumptuous complex.

Following Nero’s suicide in AD 68 the rooms were preserved thanks to the emperor Trajan, who buried the symbol of Nero’s megalomania and used it for the foundations of a thermal bath.

“A video that recounts the story of the history of the monument will be projected on the gallery of the Trajan Thermal bath, how it was constructed, its destruction, its burial and its rediscovery in the Renaissance period, and all the events in the following eras,” added Alessandro D’Alessio.

The Golden Palace is on the Colle Oppio hill which is opposite the Colosseum. It re-opened in 2014 after sections of it had been closed over worries parts of the building could collapse.

The ongoing works to secure and restore the underground site, with a total budget of over €30 million, will continue until 2018.