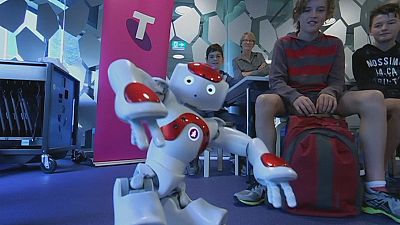 Dancing to a robot in the classroom with robots. It is perhaps a look into the future as robots are going to be used as an educational tool in schools especially to teach pupils specific skills wanted in the high-tech industry.

At the annual BETT exhibition in London, companies specialising in classroom electronics showed how pupils are being prepped for a new technological era.

The main purpose is to fill the gap between the theory learnt at school and the practice required by the market.

“In the past we were constantly teaching children about knowledge. They’re repeating, they recite whatever the teacher tells them. They do a lot of exams, but they don’t know the new technology.

‘They don’t know how to do it with their hands, you know, they just memorise the knowledge, but knowledge cannot help industry, cannot help the future of civilisation,” explained Wong Wei, CEOUBTECH Education.

The idea behind this learning process is to help pupils experience what their teachers are talking about. One example is in chemistry.

“Every teacher everywhere in the world knows there are certain topics that are really hard to get across to students. If you take the example of the periodic table, it’s a piece of paper which shows you all of the different elements and then the teacher explains to you that you have electrons orbiting around that chemical and bonds them together and as a student you just have to accept that because the teacher is unable to demonstrate it to you,” said Sean McDougall, chief executive of Touchable Universe.

It is possible to learn in other ways not just listening to theory from a teacher and that is what is behind a device created by the company Touchable Universe.

“In every class thirty percent of all the children are what you call kinesthetic learners. It means they were born so that they learn best by putting their hands on things.

‘So if you put them in your classroom environment where they’re not allowed to put their hands on things, you’re depriving them of their primary learning process and it’s also true that all children learn better as you layer on extra senses. So sight and sound is obviously better, sight, plus sound, plus touch is better again,” pointed out Sean McDougall.

And what is better than playing and learning? An example is bricks that look and work like traditional building blocks but in reality they contain all sorts of high tech gadgets including sensors, servers, LED lights and a blue tooth connection.

The time to bring robots into the classroom is now. Robots in the Classroom: What Are They Good For? https://t.co/LxIIES1RBD#makeON

It is a robot that anyone can build. The blocks are colour coded so the children know what each one can do, for example to make something move you need an orange block because that’s the one that has the motor.

“Kids learn both basics of robotics because they get an understanding of what electronic components you need to build the robot. They also learn the basics of coding because once the robot is built, in order for it to do something for you they have to programme it in an app,” explained Anna Iarotska, co-founder & COO Robo Technologies.

Learning aids in the classroom have changed quickly in the past few years and we can expect that many of the technologies we have started to see in classrooms now to become more common at schools.

What part robots will play in education in the future will be linked to how teachers choose to use them rather than being dependent on the technology itself.

For instance, robots may help to ease this transition, by helping to humanise the increasingly digital, and sometime remote, classroom experience for many pupils.