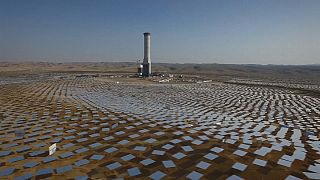 Rising from the desert landscape what will be the world’s tallest solar thermal tower.

It is still under construction 250 meters high in the Negev Desert.

The project is made up of three plots, with a fourth planned for the future, each with a different solar technology. The centerpiece is the solar tower.

In Israel's Negev desert stands what will be the world's tallest solar tower, surrounded by 50,000 heliostat mirrors https://t.co/jZEszyH2Mupic.twitter.com/EqfSKvk1u1

Encircling it are 50,000 mirrors, known as heliostats, sitting just above the dusty earth in a shimmering blanket of glass with a 1-square-kilometer reflective surface stretched out over more than 3 square kilometers of land.

“Our power station is what’s called concentrated solar power which means we have 50,000 mirrors called heliostats, with a million sq. meters of reflective surface concentrating all of the sunlight on to the solar tower right behind me.

‘The solar tower behind me will ultimately be 250 meters tall, the tallest solar tower in the world, and at the top of it will be located our boiler, which collects the sun’s rays and converts them, heats water to steam, to turn the turbine in a conventional power plant,” explained Eran Gartner CEO, Megalim Power Ltd.

When it is completed Israel’s Electricity Authority says the solar thermal power station should be able to provide enough power for around five percent of the state’s population.

The height of the tower is in direct proportion to the amount of land which the state signed over to the project. The panels were squeezed together and the closer together they are, the taller the tower needs to be.

“The reason our tower is the tallest tower in the world is not that we were seeking to break any world records, but because of the density of the solar field.

‘The closer we put all the heliostats together the taller the tower needs to be, so there is no interference between rows and rows of mirrors. The State of Israel wanted us to get a maximum utilisation of land in terms of electricity per unit of land and that’s the reason that tower has grown that height,” added Eran Gartner.

Israel has developed some of the world’s most advanced solar energy equipment and enjoys a nearly endless supply of sunshine, but the country lags behind in putting solar power on tap

Countries with cooler climates like Germany have outpaced Israel in renewable energy development. The comparative figures are far apart according to one expert.

‘So while we have seen significant steps in recent times regarding the bureaucracy about solar energy Israel’s government hasn’t really been pushing enough to reach its small goals regarding solar energy,” Leehee Goldenberg, director of the department of economy and environment at Israel Union Environmental Defense pointed out.

But with the goal of generating 10 percent of its energy from renewable sources by 2020 and the addition of the solar mega-project, a future powered by renewable energy may lie ahead, believe some.

The discovery of natural gas deposits off Israel’s shores has shifted its course and Israel now gets 70 percent of its energy from the resource.

And recent legislation has provided incentives for Israelis wanting to install solar panels on their roofs.