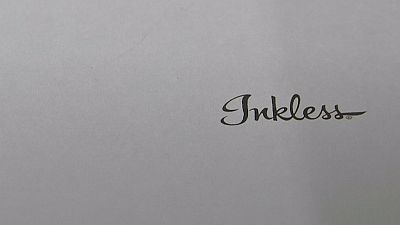 Lasers that ‘softly’ burn paper could be the next evolution in printing. Former students of the University of Technology in Delft, Netherlands, have developed a technology that can print on any kind of paper without consumables, such as toner or ink.

This technique is not unlike burning paper using a magnifying glass and sunlight.

The same principle has been created in a laboratory
using an infra-red laser ray, which passes through the set of special lenses and burns the paper, printing black carbon dots.

“We apply energy using the laser, and then the colour of the paper changes, if somebody would normally try to do this they would have problems such that the colour is actually brown and when you rub on the print it is not permanent, you can actually rub it off.

The #future is inkless: dutch #scientists are developing a printer that 'burns' the letters onto the paper with a laser #innovationpic.twitter.com/kH7qBDpw8d

The technical word to describe this writing system is ‘carbonisation’.

The tricky thing is to create the optimal balance between the laser beam intensity and type and structure of lances, to turn paper carbonisation into a print dot but not to start any combustion of it.

“So in order to control the burn of the paper we have to have an intensity which is very uniform and only in the area where we want to expose with the beam,” said Aurèle Adam,
TU Delft Faculty, Assistant Professor.

The Assistant Professor who is a physicist at the Delft University of Technology, explained that the print dot blackness intensity can be controlled by changing the pulse duration of your laser.

“The laser is sending pulses, these pulses can be extended in time, and we can actually illuminate for some time and not making the system cooling down before it switches the flame. If you adjust this and do a lot of ‘trial and error’ you can obtain a different type of black and therefore obtaining the colour you want to have at the end.”

The result of the laboratory tests have confirmed that inkless technology satisfies required parameters of black and white printing.

The company -Tocano – that is developing the technology for commercial use claims that inkless printing might attract printing manufacturers and industries.

“Our solution has certain advantages; no cartridge need to be produced anymore, so that’s the cost reduction for the complete chain. Also, there are environmental benefits, and the functionality of the printer will improve because you will have the unlimited printing printer,” said Arnaud van der Veen,
Commercial Director,Tocano

The developers of the inkless laser device believe they can develop printers which can be used by industry and in stores in a couple of years.

“We first focus on industrial markets, so for example, you can think of printing on boxes or printing books, etc. really large industrial sized machines and from that point on we will go to regular normal home users or office users.

‘So, we basically can scale down the technology on what we have into something that can fit in the everyday environment.”

Every year 14 billion dollars worth of black ink cartridges and toners are sold worldwide. Less than 30% of all cartridges are recycled, once in a dump it takes more than 450 years before a toner is totally decomposed.