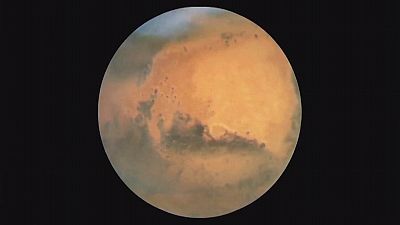 ExoMars, the European Space Agency’s mission to Mars, is at a crucial stage.

Back in March, the Schiaparelli lander started its journey to Mars from Baikonur in Kazakstan attached to the Trace Gas Orbiter. Last Sunday, the lander and the orbiter parted ways after traveling nearly 500 million kilometers together.

The two are now approaching the culmination of their mission as Schiaparelli could become the first European craft to master a successful landing on Mars, while the Trace Gas Orbiter or TGO swings into orbit to mark the start of a five-year mission tracking atmospheric gases relevant to life on Mars.

“We separate not too early so that the accuracy of landing is good, but also not too late so that we have time then to re-orientate the TGO and actually raise its altitude and not crash on Mars. Because it is on a collision course up to the moment of separation so that it can bring Schiaparelli to the ground, to the centre, hopefully, of a landing ellipse,” explains ExoMars Flight Operations Director, Michel Denis.

The landing site is close to Mars’ equator and measures around 100 kilometers in length and 15 kilometers in width. Schiaparelli will use a heat shield, parachute and propulsion system to slow its descent towards the rocky Martian surface.

It’s hoped this will provide the data needed to safely land on Mars, the aim being to use the technology for ESA’s ExoMars rover mission in 2020. Schiaparelli will only survive four Martian Days using every last bit of power stored in its batteries to capture measurements with an environmental monitoring system, gathering data on meteorological and other parameters.

Up above, the TGO will slowly fall into orbit to observe Mars’ atmosphere and seek out water-ice deposits on or just below the Martian surface. It will also search for evidence of gases such as methane, relevant when assessing past or present life on Mars.

“With ExoMars, ESA is going to use, for the first time, a method called aero-braking for a spacecraft in orbit around Mars to decrease the orbit by letting it fly through the atmosphere and using the atmospheric density to slow it down instead of using fuel for the engines,” says ExoMars Spacecraft Operations engineer Johannes Bauer.

In December 2014, NASA’s Mars rover, Curiosity, detected spikes of methane in the planet’s atmosphere, fuelling speculation that the gas may be coming from a form of life on the red planet.

Because Schiaparelli is primarily demonstrating technologies needed for landing, it does not have a long mission lifetime. However, a set of sensors will analyse the local environment during descent and after landing, monitoring the behaviour of all key technologies during the mission. The data will be sent back to Earth for post-flight reconstruction in support of future European missions to Mars.

As for the Orbiter, with the arrival of the ExoMars rover in 2021, it will become a valuable Mars telecommunications asset, providing communication services to the Rover operating on the surface of Mars.