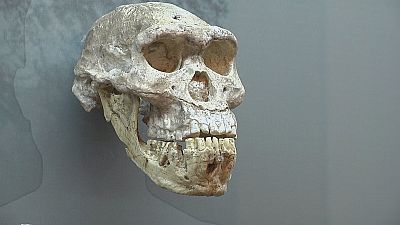 Archaelogical findings including fossilised bones and artefacts covering almost two million years of human evolution are on show at the Georgian National Museum as part of its exhibition ‘Stone Age Georgia’.

Besides the fossils, visitors can also see realistic reconstructions of early hominids.

Over 500 Paleolithic sites have been discovered in Georgia, which is considered a crossroad of cultures due to its location in the South Caucusus. Dmanisi, southeast of the capital Tbilisi, is considered one of the most significant sites.

“Exactly twenty five years ago we found a human jaw in Dmanisi – this was big sensation. It was impossible to imagine that you could have 1.8 million year-old fossils out of Africa. Since this discovery we have discovered another fossil. Now we have five skulls, four with jaws, different anatomical elements as well as animal bones and stone tools. Now, we could say that we have the best collection in the world of the early Homo out of Africa,” explains David Lordkipanidze, general director of the Georgian National Museum,

The Dmanisi skull is the most complete ancient hominid skull found to date. Known as Skull 5, it was discovered alongside the remains of four other early human ancestors, animal fossils and stone tools – all believed to be from the same time period – which makes the find truly unique.

“It’s the first evidence of humans moving out of Africa – very simple stone tools, brains literally a third of size of modern humans, but nonetheless they were able to exist in an environment with large saber-tooth cats and hyenas and other dangerous animals. It’s quite incredible,” says Nicholas Toth, co-director of the Stone Age Institute in Indiana.

The finding has forced scientists to rethink the story of early human evolution, as it could mean that rather than several Homo species, only a single species – able to cope with a variety of ecosystems – emerged from the African continent.