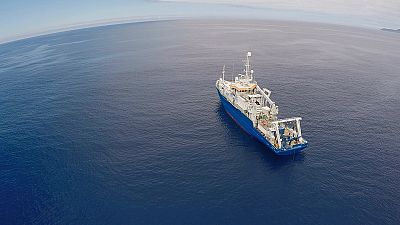 Scientists fear that even before one of the last frontiers of exploration, the ocean deep, has been properly studied it will already have been exploited by commercial deep-sea mining looking for rare metal and minerals on the ocean floor, leaving its unique ecosystems badly damaged.

There's a lot of investment going on

Astonishingly less than 0.05 percent of the ocean floor has been mapped at a level of detail where objects a few metres in size can be discerned. Marine biologists estimate that there are around 750,000 marines species yet to be identified, many of them likely to be found in the deep sea.

The mining industry has been developing technologies to extract metals and minerals more than 500 metres down on the seabed and it’s expected that commercial mining will start for the first time in 2018 around Papua New Guinea.

But before that happens the MIDAS project, which is made up of scientists, industry figures, NGOs and legal experts from 32 organisations across Europe, hopes to gather enough data to gain a good picture of what damage might be done by mining and so inform regulators of what needs to be put in place to protect the deep sea environment.

Currently the UN Convention on the Law of the Sea governs activity on the seabed and since around 70 percent of the world’s surface is covered by ocean – and more than half of that is designated as international waters – the area potentially under threat is enormous.

The 1982 UN Law of the Sea treaty states that international waters are the “common heritage of mankind” and that the International Seabed Authority (ISA), based in Jamaica is the body responsible for administering it.

It’s in the process of drawing up a mining code to govern deep-sea mining before 2018.

On board the MIDAS project’s research ship just off the Azores Islands in the Atlantic Ocean its chief scientist explained to Euronews why the seabed is now so attractive to mining.

“There are a number of deposits that are on the sea floor that people think may be exploited for commercial purposes; they’re principally metallic, but also phosphates, and we think hydrates, for energy. There’s a lot of interest at the moment, there’s a lot of investment going on, and there are a number of projects that are going to be coming to fruition fairly soon,” Ian Stewart said.

MIDAS fears that mining will greatly damage fragile seabed habitats, although it’s hard to be certain since deep sea ecosystems remain so poorly studied. Marine biologists on board the research ship are focusing on how exactly corals react to damage associated with mining.

One marine biologist from the University of the Azores is researching the damage done to coral reefs by humans such as bottom fishing, the trawling of the ocean floor with fishing lines. She is also looking at copper pollution, an unwanted by-product of deep-sea mining.

“This group of corals was subjected to mechanical damage, which can be a significant risk for a colony. This other group has been subjected to copper pollution in a concentration that would be sufficient to affect their physiology,” Inês Martins said, standing in front of two sections, a metre square each, containing the two coral groups.

Working from the research vessel located above the Mid-Atlantic Ridge Martins and her colleagues are putting a section of damaged coral and a section of undamaged coral back on the seabed to monitor how they survive and grow in the future.

“This research is crucial, as corals are the basis of the deep sea ecosystem. We need to understand how they will be affected, because the whole of the rest of the ecosystem depends on them,” another marine biologist, Antonio Godinho, working alongside Martins explained.

The coral samples will be deposited more than 200 metres deep at several underwater locations and the whole process will be visually controlled with a remotely operated underwater vehicle or ROV.

“We monitor the deployment of the corals and then, once they are landed, vertically we go along and cut the deployment ropes, make sure everything’s clear. And just take a positional fix of the position of the landers on the seabed, so that they can find them when they want to recover them in a month’s or a year’s time,” Paul Bond, a technician from Subsea Vision explained, sitting in front of screens on the ship showing the ROV’s underwater progress.

However scientists, already troubled by the lack of data, remain concerned that they need a lot more observations to draw firm conclusions.

“Scientists would always like more data – this is why we’re on this cruise here. What we really need to understand better are the processes and the interactions in the deep sea, how would they respond to the mining activities; we still need a lot more research on this. And without more research, it’s very difficult to predict accurately what the effects may or may not be,” Ian Stewart said.