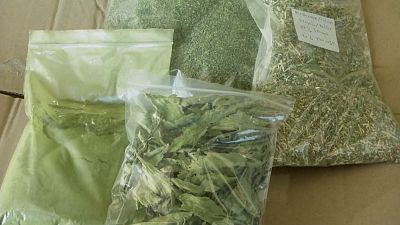 It has around 200 times sweeter than sugar and has a slight taste of liquorice. Stevia is widely used as a sugar substitute.

It’s a fast growing plant that thrives in tropical weather in Malaga, in Spain.

Farmers like Sergio Martin are turning away from traditional agriculture – and to Stevia instead.

“Before I sowed tomatoes, peppers, onions and potatoes. But the future of that kind of agriculture is very dark,” he said.

“So, I have chosen to change to another type of agriculture, to Stevia. It’s a plant that doesn’t store pests.

“It has three harvest seasons per year. It’s now four years since we seeded it and there is no need to do it again.”

Once Stevia leaves are dry, they must be boiled in order to extract the sweetener.

In 2010, Jose Luis Rosua, from the botany department of Granada University, set up a company for processing.

“We receive kilograms of dried leaf. Then we begin to boil it in order to extract its compounds. Obviously, after the first boil we get a product with these features (while holding a jar full of dark liquid extracted from Stevia plant) that does not have European Union authorisation. So, we must purify it,” he explained.

“There are different stages during the purification process – micro, ultra and nano filtration – until we achieve a purified product like this (while holding a jar full of liquid that looks like water). This purified product can be sold diluted, as long as it has 95 percent steviol (glycoside). Or it’s normally sold as Stevia pure powder.”

SteviGran processes pure Stevia powder and turns it into pills to be used as a sugar alternative.

But Stevia is not perfect. Some chefs say it doesn’t mix well with other ingredients – and it could be hard to get rid of its liquorice flavour.

There are also calls from nutritionists for more scientific research on its impact on the human body.

“You’ll find it in many products. But read the label carefully. If it reads ‘made of Stevia’, it doesn’t mean that it contains Stevia, because Stevia (the plant) is not authorised,” commented Professor Jose Miguel Mulet, from the department of agricultural engineering at the Polytechnic University of Valencia.

“The problem of consuming Stevia as a plant is that it has pharmacological activity. It can produce male infertility and a drop in blood pressure that, in some cases, could be fatal,” he continued.

“Another problem is that Stevia is being advertised as a cure for diabetes. This is huge mistake. Stevia does not substitute any diabetes treatment. It’s a sweetener suitable for diabetics because it does not increase insulin levels.”

In November 2011, the EU legalised the sweetener extracted from the Stevia plant as a new food, but not Stevia as a plant.

Farmers are not allowed to sell the plant or leaf to herbalists.

But an association has been formed to look at how the industry can grow in Andalucia.

“It’s been consumed in Europe as a traditional food, as tea or camomile. So, it’s not a new food. So the EU should let citizens sell and consume it,” said Leovigildo Martin, President of the the farmers’ association APYSCA (Association of Promoters and Marketers of Stevia in Andalucia).

Stevia – known for centuries – comes from Paraguay. Japan developed commercial production in the 70s and 80s – before it moved to China, Thailand and Malaysia.