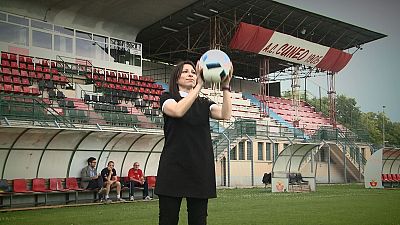 Dozens of Euro 2016 matches are being beamed via satellite to television sets and phones all over the world this summer.

But did you know that there is a technology, based on internet and satellite, that allows even a small football club to live stream their games and target a new audience?

Claudio Rosmino and the Space team travelled to Italy to see this innovation in action – and also to France to explore the science behind the technology.

Cuneo – playing to a wider audience

The players of the Cuneo Football Club in northwestern Italy have not been used to playing to large audiences.

But thanks to satellite communication features, even a small club like Cuneo can have the opportunity to broadcast their matches live – via an Internet service that relies on satellite – and, thus, reach more people.

Cuneo took part pilot project that has been developed and tested this season in the Italian Pro Football League (Italian third division) by a consortium with the support of the European Space Agency (ESA).

“Surely, it is a good thing, a benefit for a championship like the Pro League, which does not have the followers of Serie A (Italian First division), Serie B (Italian Second division) or the Champions League. It is an opportunity for our League and for Cuneo to get more visibility,” explains Cuneo’s marketing manager Simona Ragusa.

Ragusa is enthusiastic about reaching new fans for the club, saying: “Fans of course are not as numerous as in other championships, so the supporters who do not usually come at the stadium have, in this way, the possibility to see the matches at home or on a mobile phone.”

Teleporting images into space and around the world

But how does it work?

Video footage, like Cuneo’s filmed football matches, come down from satellites to teleports.

We visit a teleport in Rambouillet, France, operated by Eutelsat, to find out how the technology works.

There, Cristian Benzi, the head of Special TV events for Italy and Eurelsat, explains: “Here, we receive the signals coming via the satellite from terminals in different parts of Europe. Then, by our fibre network, we deliver them with the internet.”

The matches of the Italian Pro League have been distributed through a web-streaming channel called Sportube.

“The information we send to the satellites is converted into bits, the basic piece of information. A phone call needs a few thousand bits per second, whereas TV pictures in high definition, or sports images that are extremely more complex, require millions, sometimes billions of bits per second.”

Why internet via satellite?

“The big advantage is the fact that you just need a terminal – extremely cheap, that you can install anywhere – in order to have ADSL-like internet connectivity and do everything you usually do at home. The other great advantage of satellites is the coverage,” Benzi says.

The technology relies on geostationary satellites, which are able to keep a continual watch on a specific area of Earth from their space orbit above the equator.

One of the next steps forward for the viewers’ experience is the Ultra HD, which can provide cinema-like picture quality.

Jean Luc Deroudilhe, Fransat’s CEO, says: “Ultra high-resolution is going to be the new standard of tomorrow’s television. It has much higher quality than high definition. It has four times more of pixels than the high definition, eight million pixels – but it also has better pixels.”

Thanks to the constant progress of the broadcasting and satellite industry, in the near future, watching a sports match will be a full immersion experience.

“We foresee the opportunity to multiply the number of cameras, the points of capture of images, from the player’s point of view, for instance,” enthuses Deroudilhe.

“We can – through cameras that will be installed on the players’ shirts, for example -really live the game. Beyond having a view of the match .. but being in it and being able to increase the number of experiences, the ways of watching and experiencing a sporting moment.”

Small clubs such as Cuneo will likely have to wait a while to enjoy this video revolution. But the use of satellite and internet has the potential to bring smaller sports events to more than 200 million people across Europe.