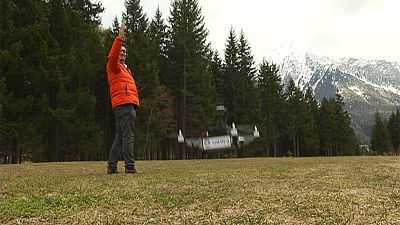 In this edition of Futuris, we look at wasps, hawks and donkeys – not animals but special robots which can help save people in danger in the Alps. It’s part of a European project called SHERPA.

It has taken three years of research to reach this point; an endeavour shared by ten partners – seven top academic groups, two SMEs, and the Italian Association of Alpine Rescuers – all linked to a cognitive and robotic system.

Heading the SHERPA project is Professor Lorenzo Marconi from Italy’s University of Bologna: “Our will is not to replace the rescuers but to really to help them with technology. With SHERPA, humans are at the center, the rescuers that we call the ‘busy geniuses’. They are geniuses because they’re characterized by experience that, at least today, cannot be imitated by machines.”

Professor Doherty and his team watch over the “HAWKS”. They are in fact two small helicopters capable of carrying a 30kg payload like scanners, thermal cameras or more simply water or supplies.

“One of the biggest problems is search operations for hikers or mushroom pickers.. all these people who get lost in the wild and their recovery requires a major deployment of rescuers and resources. So, being able to intervene with technical support is something that will help a lot,” said Adriano Favre, director of Val d’Aosta Mountain Rescue

“It gives us the possibility to continue searches during the night for example, or when visibility is very bad; when a helicopter can’t fly, a drone can,” he added.

Some 15 years ago, such drones land small helicopters were developed in Japan for agriculture. Initially remote controlled, now are they’re much more autonomous.

“The systems aren’t really commanded by humans. So the humans set up the mission and basically we point to a region and say ‘this is an interesting region’ and we really want a model. And you more or less press a button and the system automatically generates motion plans to scan an area,” said professor Doherty.

There are all sorts of applications for this technology in hard to access terrain like the search and rescue mission after last year’s German Wings plane crash in the French Alps. But researchers say some boundaries must not be broken.

SHERPA is also being used to drones that need replenishing. There’s little doubt in the near future, there’ll be new recruits among rescue workers.