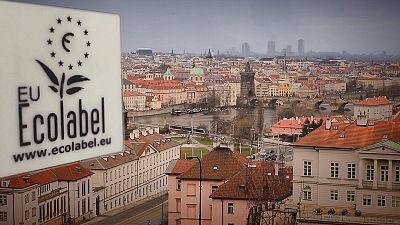 This week, Business Planet has been to the Czech capital to find out more about the European Ecolabel system.

How does it work and how can businesses benefit from the system?

Business Planet’s Serge Rombi and the team flew to Prague to see for themselves the Eurolabel scheme in operation.

What is the European Ecolabel system and how does it work?

“The EU Ecolabel is a voluntary scheme which is recognised throughout Europe,” says Pavel Hruby, who manages the system in the Czech Republic. “It helps people to identify products and services which have a reduced environmental impact.”

“Surveys show that almost 80% of travellers around the world think that accommodation providers should adopt eco-friendly practices.”

A selling point for clients

Ecolabels have proved to be a great way to attract new business, particularly in the tourism sector.

Euronews has been to the city’s Hotel Adria to see how they have made the system work to their own advantage.

Karel Doubek is the Hotel Adria’s legendary general manager. He has brought in a raft of changes in order to qualify for Ecolabel status.

“The heat generated by the chill cabinets we have in the wine cellar, in the kitchen and around the hotel is used to heat the water used by guests in their rooms,” he told Euronews.

Associated benefits for the Hotel Adria include:

Karel’s commitment is also ethical and community-orientated. He works hand-in-hand with local businesses and associations to source the products he needs and also to organise trips for the hotel’s guests. It’s an idea with wide appeal:

“More and more guests are telling us how important it is for them to respect the environment. It is mainly clients from the Nordic countries, Great Britain and other eastern European countries,”Karel says.

The Ecolabel system in 3