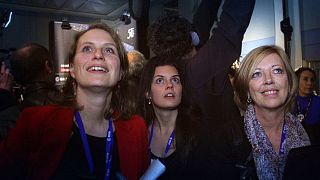 The Philae lander may be in hibernation mode on the surface of a comet, but it’s still very much alive in the hearts of the Comet Hunters, the team who helped Rosetta become the most famous space mission since the Moon landings.

Our story begins on D-Day for Rosetta, Wedensday 12th November 2014. We caught up with the Rosetta Project Scientist Matt Taylor, and asked him how he was feeling: .
“I was relaxed yesterday, and now that exponential increase into stress and excitement is there. And I’m on the up now.”

Paolo Ferri, Rosetta Mission Director at ESA is looking worried after the system designed to push Philae down onto the comet failed. “Extremely stressed as the night didn’t as smoothly as I was hoping. The lander preparation activities took much longer, we had to redo things,” he tells Euronews.

But then the good news just flowed – Rosetta confirmed separation from Philae, received the all-important signal from the lander, and then, seven hours later, the control room exploded with joy and congratulation.

In a crowded room full of excited press and VIPs, Matt exclaims:
“We’ve landed on a comet!”

The day after, and as the live TV crews are packing up the team in the ESA control room are trying to find Philae on the comet after it bounced twice and landed in a dark crevice.

But it is sending science data, and that’s what counts.

Andrea Accomazzo, Rosetta Flight Director, describes his emotion on confirmation of the landing: “During the main phases, around separation, the main phases when the lander was going down was of course excitement.”

“But definitely it was not comparable to the moment we observed touchdown.”

“I started crying, I think all the tension of many months and years of work was released in one go. It was a huge achievement, definitely,” he says.

Armelle explains what happened in the control room: “Yesterday there were three really intense moments. There was the separation itself, which was already a really critical moment as we couldn’t know in advance if it had worked. Once the separation was done there was the acquisition of the signal from Philae, and then there was the moment of landing, which was a really intense moment. At that moment we didn’t know if the lander would survive the landing, and it did. We have data, we have science, it’s extraordinary.”

Meanwhile at the German Space Agency in Cologne the Philae scientists are all smiles. It’s a magical to know that their baby is on a 4 billion year old comet.

Mario Salatti, Philae Deputy Programme Manager looks emotional as he tells euronews: “You have them bonded together for so long a time, and after that., it’s like a child who waves goodbye to the mother, ‘I’m grown up, I’m going on my own way’. It was incredible. And then it’s been one after the other, everything is exciting.”

Amid the excitement there’s urgency too. Battery life is short and they must work fast before Philae runs out of power and goes on standby.

Koen Geurts, Philae Technical Manager at DLR explains the situation: “We have communication between Philae and Rosetta once per comet rotation, so we have about 12 hours between communication slots. In this time we have to decide how to proceed, so that we prepare the commands and uplink them to Rosetta and to Philae when there is contact.”

Philae sent back stunning photos that could change our understanding of comets forever.

That’s important because scientists believe ancient comets may have brought water and the building blocks of life to planet Earth.

Holger Sierks, a leading comet scientist from Max Planck Institute for Solar System Research stresses that “this is a quantum step in what is it we are our living in here in this environment. So there’s a lot to learn.”

“We want to learn about the material strength, so how a comet is built, and understand from there how it was formed, a long time ago in the early days of our solar system,” he says.

Now information gathered by Rosetta and Philae is being processed and analysed, and groundbreaking results are being promised.

“Science isn’t instantaneous, you have to make sure your decimal point is in the right place, for instance. Soon in the next few weeks we should get some of these results out from our first impressions of the comet and targeting some of the big questions that we posed that are why we’re there in the first place,” says Matt Taylor.

So what will happen next? Andrea Accomazzo, Rosetta Flight Director gives the view from the control room: “The comet is approaching the Sun, and we perfectly know that it will activate more and at a certain stage we will not be able to orbit properly the comet anymore. We don’t know when this time is, it maybe it is January, February, March next year, we don’t know yet.”

Rosetta will keep on scrutinizing the comet until 2016, while Philae’s fate is uncertain. It may be in hibernation now, but with more solar power it could come back.

Mario Salatti, is optimistic: “Philae is on top of the comet, it will remain there, and of course the comet is getting closer to the Sun. So it can happen that we can finally charge the secondary battery again and start with other operations.”

The Comet Hunters are on an incredible journey, and they’re taking the world with them.

Their comet is hard, icy, and strange; their story is warm, human, and inspiring.

Matt Taylor sums up his feelings, and ours, about this remarkable spacecraft: “Rosetta has something that I feel that no other mission has. I can’t really describe it. I work on it, I live the mission, a little bit too much from my family’s point of view.

“This feeling that there’s a man made object next to this alien landscape, it just blows your mind. And I think that’s the thing, it’s there, and wow, it’s a wow factor.”