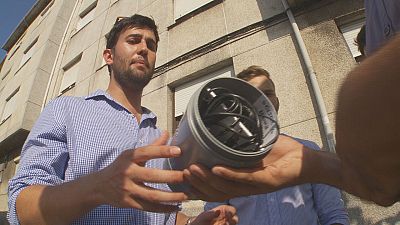 Urban noise may be a nuisance for residents, but it can also provide important information about the city and its needs. A unique experiment in the Spanish city of Santander is trying to determine how this data can be used to improve the lives of citizens. It involves engineers and scientists from a European research project.

To illustrate the issues they are tackling, the Futuris team joined the researchers at a busy junction where they watched as an ambulance battled heavy traffic to make a turn into the emergency room of a hospital.

Pedro Malo, EAR-IT project coordinator, explains how this situation can be improved: “As we can see, this ambulance needs to get to the hospital fast – lives can be at stake. So we’re proposing a technological solution – acoustic devices like this one – that can fast-track ambulances to the hospital by, for example, changing the traffic lights.”

The characteristic sound waves of a siren can be captured and automatically recognised by acoustic sensors. The smart system detects where the ambulance is coming from and can, in principle, manage traffic lights to clear the way.

“Sensors have plenty of advantages,” says Györgi Nagy, a researcher in acoustic technologies at the Fraunhofer Institute for Digital Media Technology. “They are cost-efficient and can be used for multiple purposes. And acoustic sensors don’t need the line of sight: even if we don’t see the ambulance, we can still recognise it by the sound it makes.”

Intelligent acoustic sensors are the latest addition to the city-wide network of street electronics that makes Santander Europe's best example of a 'smart city'.

But what exactly is a ‘smart city’?

“By ‘smart city’ we mean a system that gathers data on various aspects of city life. It can help to manage traffic, energy consumption, or different parameters related to the environment. These systems make the city more convenient and more sustainable,” says Luis Muñoz, a researcher in wireless networks at the University of Cantabria,

There are other, more practical benefits for ordinary citizens from these sensors, it is claimed.

One example is electromagnetic sensors in car parks that count available spaces. People get the informaton on their smart phones.

But what about privacy concerns? Researchers say even though walls in Santander now have ears, no personal conversations are recorded.

Annika Sällström, an expert in user engagement at Luleå University of Technology’s Centre for Distance-Spanning Technology believes people won’t feel they are being spied on: “People don’t want to be listened to, but still they can accept that audio is captured if it comes down to security and safety. We have found in our study that they can even give up a bit of their privacy for security, so if they can feel a safer city they can give up their privacy a bit.”

The smart network is managed from the single control room. Along with its practical role, it serves as a city-wide laboratory, helping the researchers to take new steps towards creating the city of the future.

Much more can be made of ‘acoustic infrastucture’, according to Juan Ramón Santana Martinez, a researcher in wireless sensor networks at the University of Cantabria: “We can monitor the traffic situation by measuring the noise levels on the streets, or we can even detect emergency situations: if there’s a cry for help or a gunshot, authorities can be alerted automatically.”

Do you know: what is a smart city?