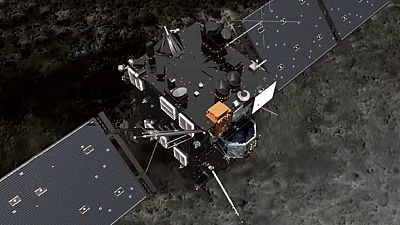 <p>The Rosetta mission is now on a race against time to prepare maps and collect data before the Philae lander is due to be sent down to the surface of comet 67P in November. In this edition of Euronews Space, the ‘Comet Hunters’ show us how to orbit a comet, how Rosetta ‘sees’ its target, and what the mission means to the world of science, and to this team in particular. </p> <p>It comes after a historic moment in spaceflight on 6th August, as Rosetta became the first ever man-made device to hunt down a comet and prepare to spend a whole year flying alongside.<br /> That event attracted hundreds of journalists from all over the world to the European Space Operations Centre in Germany, with live news, features and analysis of the mission broadcast to hundreds of millions of viewers.</p> <p>One of the most extraordinary achievements of the mission so far is the range of highly detailed photos of the comet taken by the <span class="caps">OSIRIS</span> instrument, managed by Holger Sierks.</p> <p>It uses a sensor similar to those found in digital cameras to capture the detailed images of the comet. </p> <p>“We see a lot of details, boulders over here which are house-sized. So remember this is 8 metres per pixel, so we see shadows thrown by big boulders, big stuff which is out there in these flat regions,” he told Euronews.</p> <p>Comet 67P takes 12 hours to rotate in space, meaning Rosetta’s 10 instruments have a good chance to scan it carefully from top to toe. </p> <p>Nobody has ever managed to stay this close to a comet before, and the flight team are now in the middle of some of the most complex manoeuvres ever attempted in space, as Flight Director Andrea Accomazzo explained.</p> <p>“Now that we have arrived at the comet we have to start characterising this object. This object has a very strange shape. So what we are going to fly in the very beginning is very strange orbits, almost a triangular shape, which allows us to view the object from different angles, and with this we can reconstruct its shape. These arcs that we are flying now in August are bent by the gravity of the comet itself, and this is what we want to measure. We use the spacecraft itself as a sensor for the gravity of the comet.”</p> <p>Demand for that gravity map is high – the scientists need it by mid-August if the mission plan is to stay on track. </p> <p>“This is fundamental what we are doing these days for the continuation of the mission. If we have not characterised the comet properly we cannot fly around it. We have to learn to fly around a comet while we are flying around the comet, this is a sort of self-referencing problem and we have to sort it out within a couple of weeks,” said Accomazzo.</p> <p>Rosetta is doing something so new because scientists really want to understand comets in detail. There are billions of them out beyond Jupiter, and they’re some of the most primitive bodies in our solar system. Because they’re so old they offer a record of the molecules that were present when our planet was formed 4.5 billion years ago.</p> <p>“They have brought the water we are made from, and the water we drink every day. So there is a link between Earth and life and the comets, and they tell us the story of the thermal and the chemical evolution of the early solar system,” explained Sierks.</p> <p>For the next year Comet 67P will be scanned and snapped by Rosetta, and poked and prodded by the Philae lander. This little probe should drop down and drill into the dusty surface in November. Before then the comet hunting team have to decide on a good landing zone, that suits the scientists and the technical needs of Philae.</p> <p>But the choice isn’t easy, as Matt Taylor, Rosetta Project Scientist at <span class="caps">ESA</span>, told Euronews: “Naively I could say, ‘Well we want a nice flat place to land’, but that could indicate that there is a lot of fast turning over evolution of that surface, that it actually might be fluid in nature, so you don’t want to land on it because it might be evolving on quite short timescales. So, it’s all that to consider at the moment.”</p> <p>Despite all the hard work underway, the Comet Hunters know they know it’s a once in a lifetime experience. Paolo Ferri, Rosetta Mission Director at <span class="caps">ESA</span> said: “The emotion and (they are) so enthusiastic, like little kids at Christmas. I think everybody here gets the real feeling of what we are living, and this is a real historical moment.”</p> <p>Matt Taylor stresses the wider impact of Rosetta: “Nothing else comes close to this. The exploration, the science and just the ‘wow’ factor. My son told me he wants to be a scientist and that’s only in the last year since I have been working on Rosetta, so, job done.”</p>