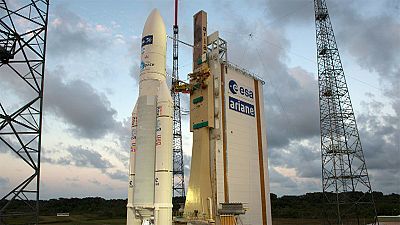 The fifth and final ATV, or Automated Transfer Vehicle, has blasted off into space from Kourou, French Guiana, bound for the International Space Station.

Flown into orbit on top of a massive Ariane 5 launcher, it marks the end of an era for the big cargo ship built in Europe. These high-tech re-supply vessels have kept the orbiting outpost of human spaceflight topped up with food, water and air to breathe over the past six years.

ATV 5, named after the Belgian Big Bang theorist George Lemaitre, is the last of the bunch, although the agency has plans to adapt the technology and develop it further for future cooperative space missions, including the development of NASA’s Orion Multi-Purpose Crew Vehicle.

“Georges Lemaître may be the last ATV, but the programme is just the first important step in ESA’s human space adventure,” says Thomas Reiter, ESA’s Director of Human Spaceflight and Operations. “The ATV programme has helped to generate key technologies that will serve as a solid basis for future human space-transportation endeavours.”

Once docked – something overseen by ESA’s latest astronaut in space, Germany’s Alexander Gerst – the ATV will be used to push the space station back up into orbit, as it tends to drift down due to light atmospheric drag. The ATV itself also becomes a temporary annex to the ISS, in which the crew can freely circulate without pressurized spacesuits.

They will have plenty of unpacking to do, as the ATV is packed with 6,600 kilogrammes of supplies, including 843 kg of water, spare parts, tools and scientific experiments. Amongst the collection of parcels is arguably one of the most unusual objects ever flown into space – a meteorite sample from Berlin-based artist Katie Paterson. It is part of an art project that involves sending a small meteorite that landed on earth 4,000 years ago back into space. Just like everything else sent up to the ISS, this particular rock had to undergo a series of safety checks and treatments, including covering it with special non-toxic coating to keep rust from entering the Space Station atmosphere, and the dulling of a sharp edge that could have been a safety concern.

The cargo ship is also carrying a curious joystick experiment designed to help understand how astronauts could remotely control robot planetary rovers. They will be asked to play basic Pong-style computer games, and the scientists will then analyse how the human body’s motor control systems change during long-term spaceflight. The experiment has a joystick fitted to a belt-style harness that is then fixed to part of the space station, in order to stop the astronauts pushing themselves around as they push the lever, back and forth.

After six months at the ISS, Georges Lemaître will do as all ATVs before it have done, and re-enter Earth’s atmosphere, burning up over the Pacific Ocean along with several tonnes of waste. Unlike most fiery break-ups in the atmosphere, the event should be captured for posterity. ESA has developed a unique infrared camera which will film the final moments of the spacecraft as the hull heats up and disintegrates. The device will work like an aircraft’s ‘black box’, storing images and then transmitting them via Iridium satellite, giving the researchers a unique interior view of what happens to a spacecraft as it is heated to 1,500 degrees centigrade by the friction of the atmosphere.

The ISS will continue to be supplied by two American companies, Orbital Sciences and SpaceX, and the Russian Progress supply vessel.