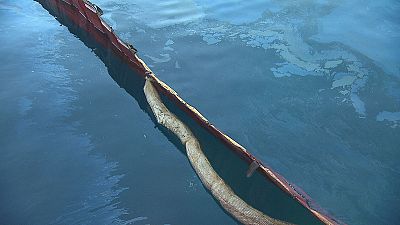 The sea is naturally self-cleaning because most pollution is eaten by microorganisms living in the water. But that process takes time. Too much time, because as the tourist season is beginning in the Mediterranean, the coastlines can be damaged at any time by shipping accidents resulting in oil spills which are difficult to remove from the surface of the water.

When a cargo ship carrying possibly hundreds of tons of diesel hits the rocks and sinks, for example, part of the cargo can be spilled. A floating barrier and boats skimming the oil off the surface of the water is the usual response to accidents like this but it’s not very efficient.

Vassilios Mamaloukas-Fragoulis, an oceanographer, and the Marine Emergency Response Director with Environmental Protection Engineering S.A. said, “This technology has its limitations. The main drawback is that the floating perimeter can’t prevent some oil leaking through. Also, you can’t recover small quantities of oil with mechanical methods, so a thin oil film remains.”

Removing leaks is hard, but waiting for microorganisms in the sea to remove them takes too long. But what if the bacteria could eat faster? That’s the goal of a European research project coordinated in Greece.

Nicolas Kalogerakis, a professor of biochemical engineering at the Technical University of Crete, and the KILL•SPILL project coordinator, said: “The main objective of our research project is to come up with new technologies to enhance natural bio-degradation carried out by microbes in the sea. We achieve that goal with a series of measures that give microbes everything necessary to eat up all the oil faster.”

So what exactly is needed to make removing oil spills more simple and eco-friendly? First, researchers make the oil mix with water using a biodegradable spray made from fermenting vegetable oils.

Roger Marchant, a microbial biotechnologist, at the University of Ulster, explained: “Spraying the oil with the surfactant doesn’t make the oil disappear. What it’s doing is breaking the oil up into smaller droplets, and these smaller droplets can then be attacked by the microorganisms in the environment to completely break the oil down.”

There’s no need to create oil-eating bacteria: they appear in the sea wherever there’s an oil leak. What’s needed is to help them grow faster.

Michail Yakimov, a marine microbiologist, at IAMC-CNR, said: “Our approach is to take a sample of the polluted water from the sea, bring it to the lab and cultivate microorganisms from it. When we have grown a large biomass of oil-eating bacteria, we spray them back over the oil slicks. So we’re simply accelerating the natural process of marine self-cleaning.”

Finally, to stimulate the bacteria to eat, researchers supply them with phosphorus and nitrogen. They have invented new “smart” particles that release the nutrients precisely where they’re needed in the polluted sea.

Once the bacteria are in the sea they have nutritional needs, for example they need phosphorus and nitrogen. So scientists deliver these nutrients directly to the bacteria, so that they can then break down the oil more efficiently.

Bacteria digest the oil, plankton eat the bacteria, and so the food chain in the sea continues. This natural way of cleaning oil spills should become generally available in the near future.

Do you know: can we eat toxic waste?