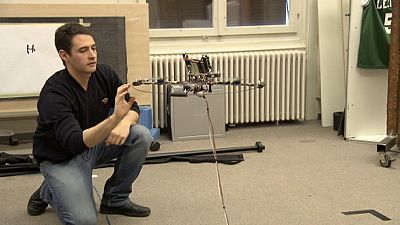 Flying machines are becoming smarter and more affordable: they are able to navigate in 3D and handle easy tasks by themselves.

Will these drones rise to the challenge and help save lives among factory workers?

In this edition of Futuris, we take a look at the quadrocopter – a device that travels in the air propelled by four rotors.

Its job is to make robots fly. That’s the objective of a European research project being carried out in the Swiss town of Zurich.

Thanks to its onboard cameras, the model has good visibility and can find its way in the air. It is able to avoid obstacles and resume its trajectory if pushed away.

“The vehicle itself has to know where it is, how fast it’s moving, what the surroundings look like. So you have a couple of cameras in the centre, you have high power LEDs to illuminate the scene, and you have an inertial measurement unit that gives us angular velocity and acceleration. So the vehicle knows exactly where it is, and it can come back if I push it,” says Janosch Nikolic, researcher in aerial service robotics at the Autonomous Systems Lab.

The idea is for flying robots like these to assist humans in carrying out dangerous and costly tasks – such as inspecting walls or pipes in large factories.

“What they have to do at the moment – they have to shut down the plant, send in people to do the inspection manually, which is time-consuming and very dangerous – people have lost their lives carrying inspections of this kind,” says Janosch Nikolic.

“So we’re trying to send in one or a bunch of helicopters that will do a visual inspection and give you a 3D model of the boiler, and afterwards you can inspect manually specific areas of the boiler.”

The design of the flying robot can be modified to allow it to pick up small objects, for example, or use ultrasonic sensors to see inside walls.

Its automatic functions make it easier to pilot for the operator, who doesn’t need to be an expert to learn how to control the machine.

“It’s very easy to use – I don’t even need to know how to pilot it, I just press the buttons to make it turn right or left, or go up or down. Its automatic controls ensure that even inexperienced users can use this system. It almost feels like a video game,” says Roberto Naldi, assistant professor of automatic control at the university of Bologna.

“There are two main challenges concerning this kind of vehicle: first of all, we need to develop the technology needed to allow it to navigate autonomously in an unfamiliar environment, so we are concentrating on reconstructing the environment, in real time, via onboard sensors. The other major challenge is for the vehicle not only to function in automatic control in free flight, but also in physical interaction with its environment,” says Lorenzo Marconi, Airobots project coordinator and professor of automatic control at the university of Bologna.